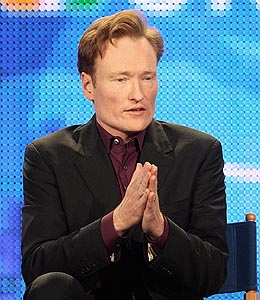 After a week of feuding late-night jokes and jabs at NBC, Conan O'Brien has reportedly agreed to leave the "Tonight Show" and give Jay Leno his time slot.

Are you team Conan or team Leno? Vote now!

According to the L.A. Times, reps for both comedians have negotiated a deal about the late-night switch up, resolving financial issues for Conan (who has two and a half years left on his contract) and moving Jay Leno from primetime back to late night.

A source tells the newspaper that NBC will write Conan a big check as a part of the deal -- the amount is expected to be between $25 million and $35 million.

NBC initially wanted to bump Conan's "Tonight Show" from the 11:35 PM time slot to 12:05 AM, but O'Brien refused and said the move would violate the terms of his contract.

Conan, the fifth host ever for the "Tonight Show," held his title for seven months. His last show will likely be Friday, January 22.

Leno is expected to end his primetime run on February 11, the day before coverage of the Winter Olympics begins.