The nominations are in -- and "Extra" has all the reactions from the celebrities who are up for Golden Globes in 2010! 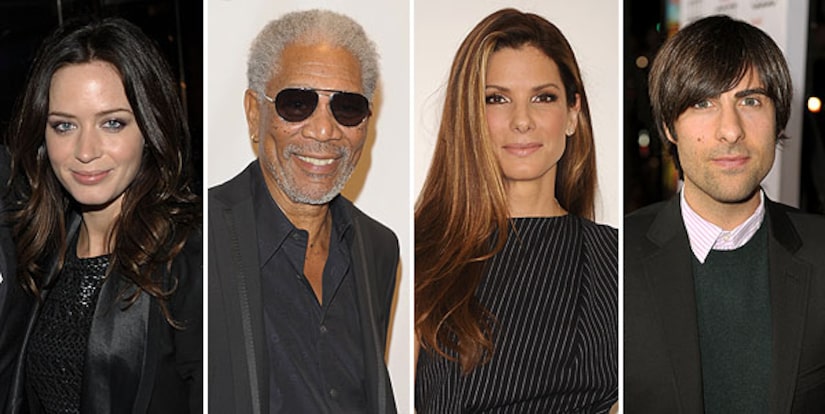 Pedro Almodovar, Best Foreign Language Film for "Broken Embraces": "Although I've received nominations before and I've even won Golden Globes in the past, every new nomination comes to me as a big and pleasant surprise. Every time seems harder to get it and this nomination for 'Broken Embraces' makes me even happier than the ones I've had before, so I thank the members of the HFPA for making my day!"

Alec Baldwin, Best Actor in a Television Series, Comedy/Musical for "30 Rock": "I'm grateful for anything that helps the show."

Kathryn Bigelow, Best Motion Picture for "The Hurt Locker": "I am thrilled that the Hollywood Foreign Press Association has chosen to honor 'The Hurt Locker' this year along side so many other great films. It is doubly exciting to be recognized for my work as a director on this film which is so very close to my heart, and which shines a light on the impossible situation overseas."

Emily Blunt, Best Actress, Drama for "The Young Victoria": "I'm so grateful to have been nominated by the HFPA for what really is the role of my career so far. Playing the young Queen Victoria was a big challenge, but also a hugely rewarding experience and now to find myself nominated for a Golden Globe alongside such incredibly talented women is a massive thrill and is testament to the incredible effort of all the cast and crew on the film."

Sandra Bullock, Best Actress for "The Proposal" and "The Blind Side": "I am beyond stunned. Just to be included in the company of these amazing women I have so admired through the years, has left me slack jawed with awe. It is TRULY an honor just to be nominated by the Hollywood Foreign Press, and I will cherish this moment with all the artists I have worked with behind the scenes, who truly make me look good! Thank you very much."

George Clooney, Best Actor, Drama "Up In the Air": "Not a bad way to start a Tuesday."

Penélope Cruz, Best Supporting Actress, Comedy/Musical for "Nine": "I am so honored to be nominated for 'Nine.' I had an incredible time working on the film with such an amazing director, Rob Marshall, and with this extraordinary cast. Thank you to the Hollywood Foreign Press for recognizing me. I am also thrilled that Broken Embraces was nominated. Pedro has once again made a very brave and beautiful movie and I was very lucky to be a part of it."

Daniel Day-Lewis, Best Actor, Comedy/Musical for "Nine": "A hearty thank you to the members of the HFPA. I am delighted and very grateful to be included. Congratulations to all fellow nominees and eternal thanks to Rob Marshall."

Pete Docter, Best Animated Feature for "Up": "We're flattered and honored with the support we've received for 'Up' throughout the year, and this is a humbling, happy year-end moment for us. We spend years making these films and you never know how people will receive
them, and we continue to be thrilled with the response. Thank you to the Hollywood Foreign Press for this incredible honor."

Robert Downey Jr., Best Actor, Comedy/Musical for "Sherlock Holmes": "My heartfelt thanks to the Hollywood Foreign Press for this wonderful nomination. I share this honor with Jude Law and all of my cast-mates, my great director Guy Ritchie and the rest of the team whose collaboration and camaraderie helped make this new incarnation of Sherlock Holmes possible."

Colin Firth, Best Actor, Drama for "A Single Man": "The Hollywood Foreign Press have just given me a time out from my 20 year midlife crisis. My heartfelt thanks to them." 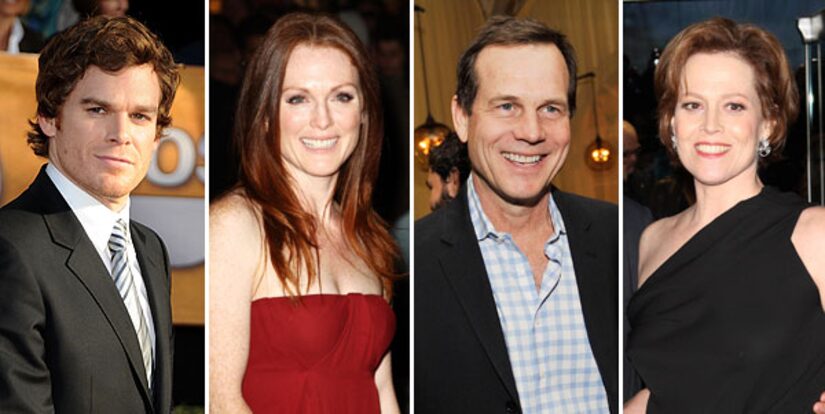 Morgan Freeman, Best Actor, Drama for "Invictus": "I want to thank the Hollywood Foreign Press Association for this tremendous honor. Congratulations to Clint Eastwood and Matt Damon on their nominations, and I extend my deepest gratitude to my producing partner Lori McCreary, and the entire cast and crew of 'Invictus' for their tireless work to make a film befitting of Nelson Mandela's legacy. Playing Mandela was the greatest honor of my career, and I hope that I have done him proud."

Michael C. Hall, Best Actor in a Television Series, Drama for "Dexter": "Thanks to the HFPA for this collective and individual recognition. I'm very gratified that John received an individual nomination as well. His performance as Trinity is an instant classic."

Julianne Moore, Best Actress, Drama for "The Single Man": "I am so honored and thrilled to be among the Golden Globe nominees this year. I am happy for everybody -- particularly my friend Colin Firth!"

Bill Paxton, Best Actor in a Television Series, Drama for "Big Love": "It's such a great honor to be nominated this morning. I'm so proud of this past season of Big Love, and am thrilled to share the nominations with our loyal cast and crew. A special thanks to the Hollywood Foreign Press Association for their support. Your organization has championed us from the very beginning. We really are a family and without my three beautiful wives I would not have made it on this short list of actors so I truly do share this with Jeanne, Ginnifer and Chloe."

Todd Phillips, Best Picture, Comedy/Musical for "The Hangover": "We are completely thrilled to be nominated for a Golden Globe. The Globes have a long and illustrious history...we are happy to spoil that. Thank you HFPA."

Jason Schwartzman, Best Animated Feature for "Fantastic Mr. Fox": "It's such an honor for the film to be nominated especially considering the competition. I'm very proud for Wes and everyone who worked so hard to transform such a unique book into such a unique film."

Quentin Tarantino, Best Picture, Drama for "Inglourious Basterds": "I'm ecstatic for the recognition by the Hollywood Foreign Press and I'm thrilled to be in the company of the other writers and directors that have been nominated."

Christoph Waltz, Best Supporting Actor, Drama for "Inglourious Basterds": "Thank you to the Hollywood Foreign Press who have transported me from the unbelievable into the unimaginable."

Sigourney Weaver, Best Actress in a Mini-Series or Motion Picture Made for Television for "Prayers for Bobby": "'Prayers For Bobby' is a project close to my heart and it means so much to have the Hollywood Foreign Press acknowledge my work and the importance of this small but powerful film based on a true story."