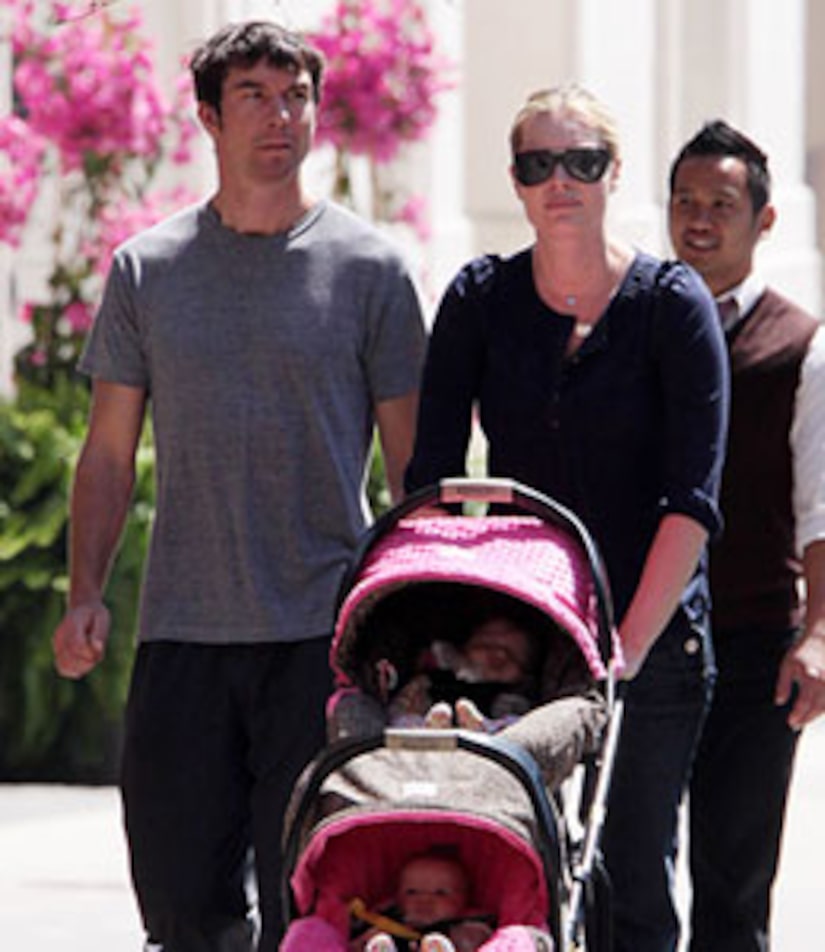 Rebecca Romijn sat down with "Extra" for her first interview since giving birth to her 4-month-old twins, Charlie and Dolly. The "Ugly Betty" beauty is revealing her secret to dropping the baby weight, the hardest part about going back to work and how she and hubby Jerry O'Connell keep their romance alive.

Romijn's close to losing the 60 pounds she gained during her pregnancy -- and she didn't have a workout plan! She says, "I think within the first three weeks, I took off like 35 pounds without doing anything!" Almost anything, she admits, "I haven't been able to work out that much because I have twins. It's impossible to get back into a regular schedule." Rebecca is losing the weight naturally, saying, "Breast feeding is the very best diet I've been on. It's amazing. It's like you have to eat 5,000 extra calories a day or you can't produce enough food for them. So, that's been fun as well." She adds, "I'm not pretending to be back to the shape I was in beforehand. I still have a ways to go... We've got Spanx underneath almost everything"

Romijn says the twins aren't tough to tell apart because Charlie looks like Jerry and Dolly looks like her, but she still thinks "they are both just gorgeous!"

The new mom is currently shooting "The Love Child" and she's juggling home and work life. The actress reveals, "Our hours have been really late and we're working outside of Toronto in Hamilton which is about an hour away and I am still nursing [the babies] around the clock. So, we have to do a lot of milk runs."

Rebecca gives her number one man a thumbs-up, saying O'Connell is "so awesome. He's just like totally on diaper duty. I think he's having a really good time also."

They happy couple have been able to time for date nights. "Because the grandparents are here, everybody switches off when they are taking care of the babies and it's working out perfectly... [Jerry and I] will end up sneaking away for an hour even if it is just around the corner from the hotel," she adds.

The model mom couldn't be happier, saying, "They're really smiley and not fussy... for four months old, it's supposed to be really difficult but I have to say, it's just fun."