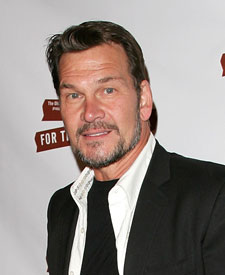 Swayze, who has been undergoing treatment at Stanford University Medical Center, hopes his pilot episode will get the go-ahead from A&E.

"He completed a phenomenal pilot in December, and it remains in strong contention to become a series," said A&E spokesperson Michael Feeney, "It's one of several pilots we have in development to become a series on A&E, but the network has not made a decision yet."

Production for the series would start in the summer or early fall if the project gets picked up, sources said.