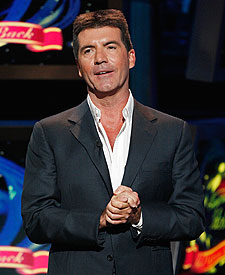 "Idol" has gotten too big for the small screen -- now, it's time for "American Idol: The Movie!"

"Extra" gave judge Simon Cowell a hypothetical offer he couldn't refuse -- to cast the silver screen version of the hit TV show -- and judge Paula is not going to like who Mr. Mean picked to play her!

Cowell's pick for judge Randy Jackson -- the jokingly self-titled "black Brad Pitt" -- was none other than Uncle Buck. "John Candy," said Simon. As for happy host Ryan Seacrest, Cowell chose an actor who is known for bringing the laughs. "Dudley Moore," said Simon.

When asked who would play Paula, the notoriously nasty judge responded, "Liz Taylor -- now!" As for the role of the biting Brit himself, Cowell chose a more soft-spoken Hollywood icon. "Bela Lugosi," said Simon, "He was a silent movie actor who played the first Dracula -- very, very good-looking guy."