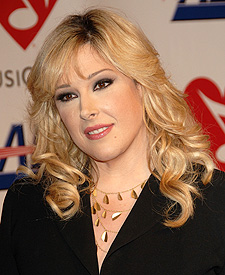 An emotional Carnie Wilson appeared on "Good Morning America," talking about regaining 70 pounds since her gastric bypass surgery nine years ago, lamenting, "It's always going to be a battle."

The National Enquirer claimed her weight ballooned back to 227 pounds, but Carnie blasted, "It's total bull****.Total bull." She also shot down reports claiming she's set to undergo another procedure to lose weight. "They were saying I was going to get liposuction; that I was going to have a second gastro bypass to have a baby. I mean, it's laughable."

In 1999, the Wilson Phillips singer famously shed 150 pounds after surgery, and shed still more weight on VH1's "Celebrity Fit Club." But she packed the pounds back on after the birth of her daughter, Lola, 2, and says her main fight is to cut back on the snacking and continue exercising to lose at least 30 pounds.