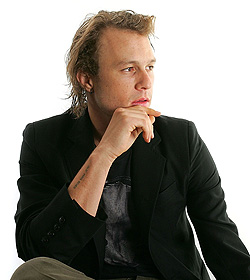 Heath Ledger's father, Kim, quickly stifled controversy surrounding the will of the late Heath Ledger, saying that "Matilda is our absolute priority and Michelle is an integral part of our family." The late actor's will was drawn in 2003, before his relationship with Michelle Williams and the subsequent birth of their daughter, Matilda, now 2.

Heath died January 22, and documents show that he left everything to his parents and sister.

But dad Kim Ledger, referring to Michelle and Matilda, insisted in a statement that "They will be taken care of and that's how Heath would want it to be."

Ledger's will was filed in April of 2003 in Australia, according to the New York Daily News, and Manhattan Surrogate's Court revealed that the actor had less than $145,000 in NY assets at the time, including a Prius and $20,000 worth of home furnishings. People magazine quotes a Ledger rep, saying, "The story is getting taken out of context and media is speculating that this means Michelle and Matilda will not be taken care of. I want to make it very clear nothing could be farther from the truth."

Click here to see the last will and testament of Heath Ledger.

'Sopranos' Co-Star on James Gandolfini's Eating Habits: 'I Was… 10