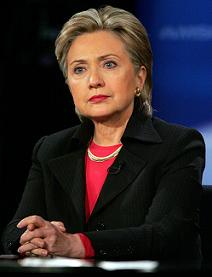 Just call her "Thrillary" Clinton, because Hollywood can’t stop buzzing about the senator’s headline-grabbing night and her six-hour TV marathon on six networks -- just hours after her rebound in the primaries. "I'm the one who can win the presidency," Hillary said, looking refreshed by victory on this morning’s "Today" show.

How is she doing it? "Extra’s" own A.J. Calloway got the scoop from Hillary herself, who said her secret is getting a good night’s rest. "Sleep whenever you can," Clinton said. "I try to eat well, but the occasional splurge makes you feel better when you’re tired. Just try to do something that you really love getting up in the morning for."

Sleep schedules weren’t the only Hillary secrets "Extra" uncovered. Director and long-time Clinton supporter Rob Reiner told "Extra" that Jack Nicholson’s endorsement video began on the set of "The Bucket List," which Reiner directed. "I said, ‘Maybe we'll call on you at some point, Jack,’ and he said, ‘Yeah, yeah, call on me if you need me,’ and this was the time and he agreed to do it." Nicholson finally got the call from Reiner, and the rest is cyberspace promo history.

Barack is still hot on the trail; he just landed a Rolling Stone endorsement, and Will.i.Am is supporting him with his "We Are the Ones" music video. Jessica Alba, who appears in the video, said, "I think he brings so much hope and light and a really positive change to our country."