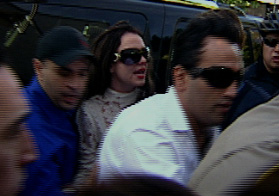 Recuperating pop star Britney Spears may have given paparazzo boytoy Adnan Ghalib the cowgirl boot. British tabloid The Sun is reporting that Miss Spears had a bit of a hissy fit this weekend -- and threw Adnan's cell phone into the cement pond after seeing "saucy" texts from another woman. Snoop that, dog!

"What's this about?" Brit reportedly hollered at Adnan. "You're cheating on me!" When Adnan was unable to convince Britney that the woman was just a "friend," she allegedly told him, "That's it. It's over!" and tossed his Apple gadget in the deep end. That’ll put a damper on your text messages!

Sources told X17 Online that Brit had been over Adnan for quite some time, but kept the relationship going because he was the only friend Jamie Spears permitted the pop star to see. X17 is also reporting that Adnan was caught walking hand-in-hand with another woman this weekend outside maternity store Pea in the Pod in Beverly Hills, but he broke free of her when he noticed he'd been spotted.