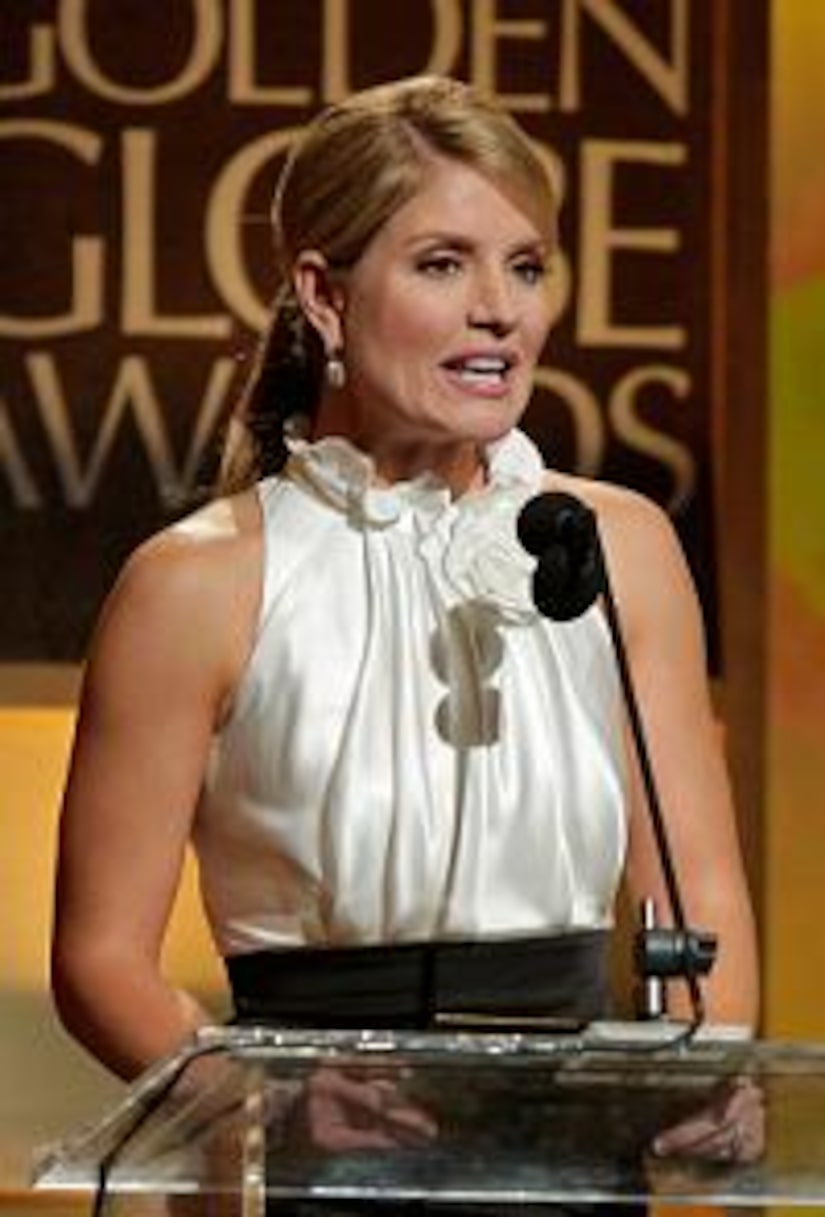 So I ran into Lynne Lester, Senior Producer, at the Boom Boom Room Suite in L.A. She says "hey, they just asked me if you want to present at the Golden Globes Press Conference. I need to know your answer in 5 minutes." It took me 5 seconds. I was like "Are you joking? Do you mean ACTUALLY PRESENT AN AWARD...like I would get the envelope and say and the Golden Globe goes to....." She said yes...so I said "hell yes."

The next 24 hours were ridiculous. Julie (our stylist on the show) and Kara (her assistant) worked 14 hours the next day to find the perfect outfit. It was tough because they wanted business attire with no boobs and no sparkle. Unfortunately, that is my entire hoochie wardrobe. They did find the perfect outfit...a BCBG dress with a white silk top and a black bottom. So at least that was done!

They had all of the entertainment hosts (there were five of us all together) get there at 2:00 for a rehearsal (and we actually started on time...that NEVER happens in Hollywood). Some people came camera ready and other came in casual clothes with no makeup. They immediately took all five of us out on stage and gave us mock envelopes. We each took our turn going through the nominees, practicing pronunciations and reading off the prompter. I had a lot of difficult names so I kept reading them over and over and over and over. They told us things were changing minute by minute but for now 60 countries were going to carry the press conference live as well as CNN, E!, TV Guide, and CBS. I wouldn't even let my mind go there...because I didn't want to get too nervous.

Then Theresa Coffino (our executive producer) came in the tiny bathroom with me and helped me put on my dress. Yes, I am 37 years old and I can't dress myself. I walked around like a freak because I am a notorious slob and I didn't want to spill anything on my dress. Then Theresa and Lynne and I went over what I was going to say. (We recorded some backstage video but security came over and told us we couldn't do that...so sorry there is no video).

Finally it was 5:30 and they gathered us in the green room...I started getting that nauseous, fluttery feeling in my stomach. They walked us out and sat us in our seats to the left of the stage. The still photographers that sat in the front row started taking pictures of us...I positioned my legs so I wasn't pulling a Britney and tried to act like a lady (this is difficult for me). At one point I looked up at the stage. It was lit nicely in all different tones of gold. It looked a lot like the stage does when they announce the nominations.

I couldn't believe I was there. I mean, I am a host not an actress. It never ever occurred to me that I would be on this stage as a participant. The room was filled with reporters, publicists, photographers, and other people in the biz. It was my turn and I walked to the stage carefully (I had new shoes and I could just see myself tripping in front of millions of people). I made a quick joke (people actually laughed...they were probably just being nice but I'll take it!) and then I read my material. It was surreal saying the words "AND THE GOLDEN GLOBE GOES TO....". It was over faster than it had begun. I made another quick joke (again probably polite laughter) and sat back down.

Afterwards all of the presenters posed for photographers and my stomach hurt from sucking in so much. I had a momentary sense of relief, but then Theresa came over and said "you are on Larry King Live in 4 minutes." I babbled incoherently through the interview with Larry...I couldn't hear very well and I was having trouble remembering all the awards that had just been announced. But then it was all over and I fell asleep in the car on the way home :)