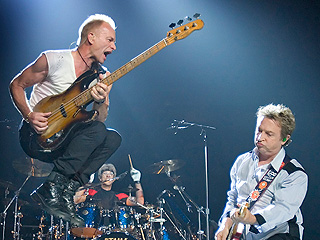 They’re older, wiser and hotter than ever – The Police are back in action, reuniting for a concert tour 23 years in the making!

And only “Extra” is with Sting, drummer Stewart Copeland and guitarist Andy Summers at a private showing of Andy’s classic Police photos in L.A., where they discuss life on the road – the second time around.

“Everything is different, but nothing has changed,” said Stewart.

“I think it’s like Mom and Dad getting back together again,” Sting added.

“It’s like riding a bike,” Andy insisted. “What was weird was the bit in between where we weren’t playing together.”

Sting decided to call up the band and reignite old flames in order to make music once again. It was a decision that’s now resulting in sold-out arenas!

But he managed to gather the boys, even though they risked those notorious clashes again.

“We navigate better than we used to,” Sting said. “You know, we used to be at each other’s throats.”

“We're all really fond of each other and have been ever since day one 30 years ago,” insisted Stewart. “We’re just opposite, and we groove on it.”

“We're a little more grounded,” Andy agreed. “We've all had children since then. I think having children is very grounding.”

Twenty years and several kids later, Sting says things have changed a lot for him, too.

Sting, shy? The same man who had women throwing panties at him for years? He can’t possibly get over that!

Added Sting, “Having panties thrown at me? No, I like it.”

Andy Summer's exhbition can be seen though July 12th at

Gallery hours are Tuesday-Saturday 11:30-7 PM or by appointment