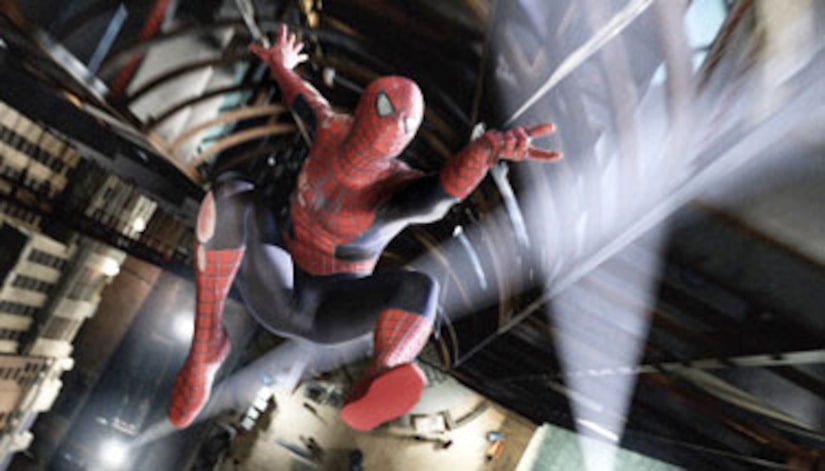 “Spiderman” is back in the latest installment of the comic book classic!

This time around, Spiderman's suit turns black as he explores his dark side. But in real life, Tobey Maguire, who plays Spidey, couldn't be nicer as he proudly posed for the cameras with fiancée Jennifer Meyer at the Big Apple premiere.

So, how is he reacting to the “Spiderman” mania?

The New York premiere also served as a birthday bash for the beautiful Kirsten Dunst, who celebrated her 25th birthday in red carpet style!

The gorgeous leading lady also hinted that she may be up for “Spiderman 4.”

“Yes, I think so, if Sam and Tobey and I do it together… that's the team,” she dished.

Or course, all the villains were there for the big premiere, including James Franco who plays the Green Goblin, Junior.

Thomas Haden Church, who stars as Sandman, also stormed the red carpet, as did Topher Grace, who gave “Extra” his best “Venom.”

“Can you handle that 'Extra'? I'm about to kick Spiderman's a**!” Topher teased.

“One bad guy after another,” Church chimed in. “Sometimes Tobey just needs to be taught a lesson. I think you know what I'm talking about.”

But off the big screen, this beauty is taken… and a proud new parent to son, Theo.

“I just had a baby practically two seconds ago, so I'm shocked right now at all these people,” Howard admitted.

Meanwhile, Tobey let “Extra” in on a “Spiderman 3” secret: get ready to see the superhero bust a move… as in the moves displayed on ABC's “Dancing with the Stars.”

Although Maguire told us, “I don't know that I could quite contend with the talent on that show.”

Either way, “Spiderman 3” will get his groove on, this Friday, May 4, at a theater near you!