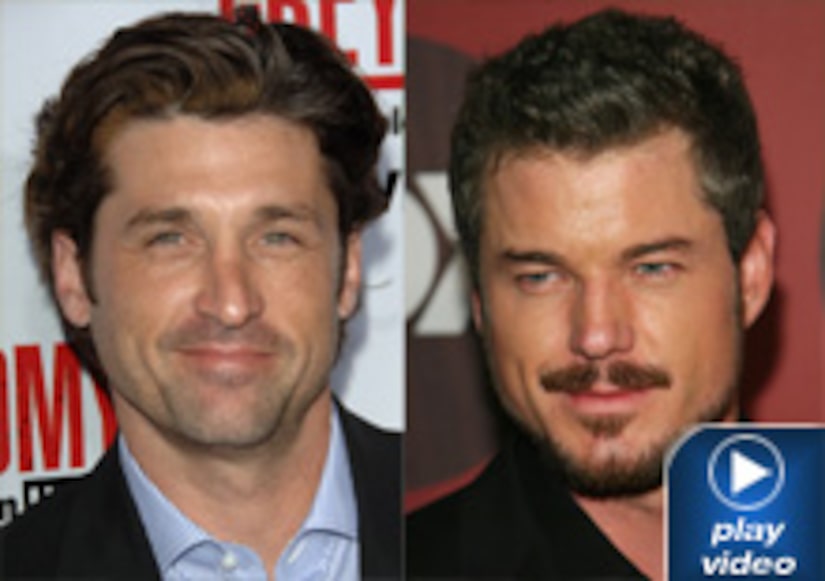 Patrick Dempsey and the rest of the “Grey's” docs are full of holiday cheer, as they were just named Entertainment Weekly's Entertainers of the Year.

“We're all very proud of this,” Patrick said. “I think the show is successful because it is everybody, all the different characters and storylines.”

Now McDreamy is getting a little McSteamy on the big screen!

In the movie, Swank plays an embattled school teacher trying to connect with students in the inner city, and Patrick told us that the Oscar winner herself picked him for the part!

“The fact that it was a true story and it says a lot about our education system and what one person can do,” he revealed. “It was well executed, and I wanted to be a part of it.”

Dempsey's real-life storyline is about to get even more exciting as well, as he and his wife of seven years, Jill, are expecting twin boys early next year.

The Golden Globe nominee is doing his best not to put on any sympathy weight.

But what does Patrick really think about the on-screen rivalry between McSteamy and McDreamy?

“We don't have that as actors, we have a good time,” Patrick admitted. “I would like to see them work it out.”

Patrick also dished that with all the excitement in his life right now, he's definitely looking forward to staying home for the holidays!

“I think family just keeps it all in perspective, it helps me stay grounded,” he admitted.