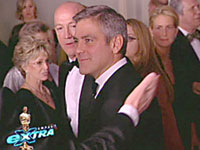 The 2006 Academy Awards was a mixed bag of surprising twists with a few predictable winners. And "Extra" caught up with the golden stars at the annual Governor's Ball celebration!

The biggest upset of the night was "Crash" taking home the honor for best picture. Nominee Terrence Howard, who brought his son, told us he wasn't too surprised. "I knew it was going to be "Crash," he confessed. "It was the most important film that touched everyone's life."

Rapper Ludacris, Howard's co-star in the film "Hustle and Flow," was ready to celebrate. "I could not be happier!" he exclaimed.

Even the stunning Jessica Alba got caught up in the "Crash" excitement. "I was right next to them and they were all screaming. It was fun," she revealed.

But all eyes were on the man of the evening, George Clooney, who was nominated for three awards and walked home with one statue for Best Supporting Actor for his role in "Syriana."

"I didn't think I was going to win, but once he called my name, I thought I'd won," the shocked Clooney said. "It would seem rude if I didn't go up and accept it at that point," he joked.

And George shared his excitement that he now has another title to add to his growing list of accolades! "This will be synonymous with my name from now on. Oscar winner George Clooney, Sexiest Man Alive 1997."

Although a mega movie star now, George isn't letting it go to his head. "The nice thing is, I wasn't kidding when I said from now on, it's Oscar winner. That's a great thing. It's a really nice thing," he said.

So, what's up next for the Oscar winner?

"Well, Sleeping with Stan Rosenfield later. He's the most famous publicist on the earth now, and I think we've said it before, a hellcat in the sack," he joked.

And a very emotional Best Actor winner, Philip Seymour Hoffman, chatted with "Extra" just moments after his acceptance speech during which he praised and thanked his mother, who was in the audience.

"Her being there meant a lot to her in a way that no one in that room really knows," he said. "I hadn't had a chance to thank my mom at the other awards events, so I wanted to take that opportunity to say it, and tonight I did."

Mom-to-be, Rachel Weisz, was similarly overwhelmed by the new baby she took home: "As an actor, you know, it's the greatest honor we can get," Weisz acknowledged.

And of course, there were many unforgettable onstage moments, including Jennifer Garner's now infamous trip! The sophisticated actress nearly fell on her way to present, but managed to quickly gather herself together and quipped, "Thank you, I do my own stunts."

Comedian Steve Carell was also a good sport, donning a pair of fake eyelashes to present the award for best makeup. "It was pretty ugly. I was peeling off one of those eyelashes on the way downstairs," he admitted. It was also a night for the history books when the Three 6 Mafia became the first rap group to win an Oscar for best song. And they already have plans to bling up their new statue.

"I'm going to get him a set of diamond teeth made for his mouth, too," they joked.

Chart-topper and last year's best actor, Jamie Foxx, was singing their praises, too, and gave them some golden advice: "Enjoy this, you've done something that is so beautifully blessed."

Golden advice for all the winners on Hollywood's biggest night! 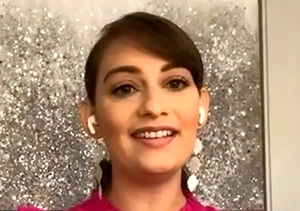 What Does the Future Hold? Jenn Lahmers’ Psychic Reading with Eva White