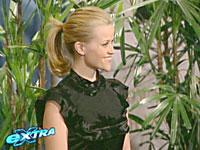 With less than 72 hours to go until the biggest night in Hollywood, the stars are basking in the golden light. From host Jon Stewart to Best Actress nominee Reese Witherspoon, each celebrity is soaking up the excitement in their own way.

Jon Stewart joined the set of "The Ellen DeGeneres Show" to sharpen his routine with a dress rehearsal. When Ellen asked what he will wear for the big night, Stewart revealed, "Tobey Maguire."

While Jon is preparing for the big laughs, Best Actress nominee Keira Knightley joined other celebs, like hotel heiress Paris Hilton, for a day of pampering. The ladies indulged in luxurious spa treatments, courtesy of the Diamond Aquifer Suite at the SoHo House.

Meanwhile, the Best Director and Best Actress nominees can anticipate a phone call on a special edition Motorola cell phone, which hasn't even hit the market yet. They will each receive one free on the big night.

Over at the Revlon suite, Reese Witherspoon and other Best Actress nominees also received a custom-made crocodile handbag. Inside are personalized notes from family and friends!

Many of the stars will be wearing Hearts on Fire diamonds Sunday night. This award season alone, George Clooney, Teri Hatcher, Marcia Cross and Jamie Foxx have already worn designs by the Boston-based jeweler.

You can follow the pre-Oscar buzz this week in People magazine's Hollywood Daily and right here, on "Extra!"