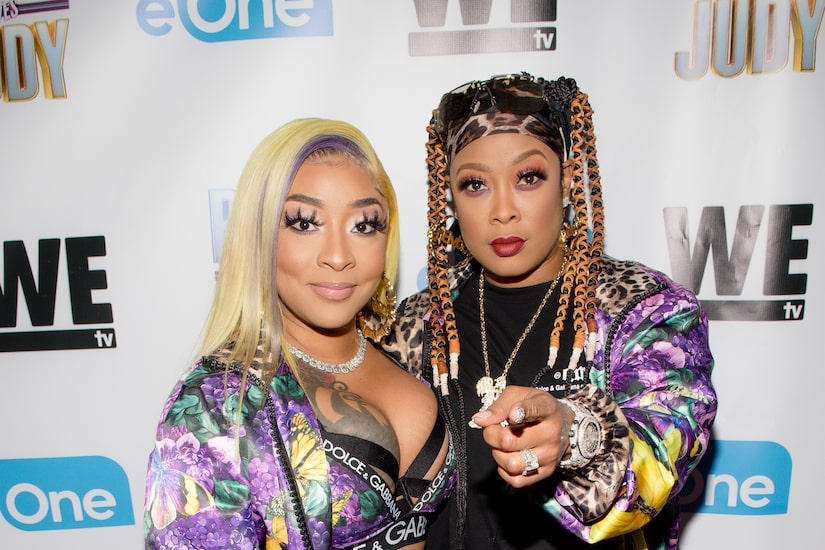 On Tuesday, Da Brat and fiancée Jesseca “Judy” Dupart tied the knot in a lavish ceremony at the Horse Mansion in Fairburn, Georgia.

The “Brat Loves Judy” co-stars were married in front of 100 guests, including Eva Marcille, Porsha Williams, and Kandi Burruss.

Speaking about their special day, Brat, 47, told People magazine the pair had “so many things going on, and so many decisions to make” before walking down the aisle, but she is looking forward to finally calling Dupart, 40, her “wife.”

“Everything about her made me want her to be mine forever,” the rapper said, “And I felt like I knew it not much longer than from the day we met.”

Both brides had their Cinderella moment, arriving at the ceremony in two horse-drawn carriages. As they walked down the aisle together to the tune of “Here and Now” by Luther Vandross, the pair wore dresses by designer Esé Azénabor. Dupart wore Jimmy Choo heels, while Brat completed her look with sneakers.

The brides were escorted down the aisle by Jermaine Dupri and Dupart’s brother, Damon Dupart Sr., while Lisa McCoy served as a bridesmaid.

The date chosen for the wedding was no accident, as it holds special meaning for the couple.

Dupart explained, “We’ve been calling each other twin flames for a while. So this date, 2/22/22, is a significant event. We just didn’t want to miss it because it comes once in a lifetime. It’s relevant. It’s just real significant to our relationship. It signifies angel numbers, and it also is reminiscent of twin flames.”

Guests at the reception were surrounded by purple and pink flowers while they feasted on a duet entrée of Southern-fried lobster tail with port wine braised short ribs over truffle mac and cheese, grilled asparagus with honey-whole grain mustard sauce, and broccolini with roasted garlic. To finish it all off, a butter almond cake by Cakes by La’Meeka was served.

The end of the evening was marked by the Treme Sidewalk Steppers Second Line Band, with Brat and Dupart dancing out of the reception. The couple drove off in a blue Bentley as guests cheered.

The wedding will air on an upcoming season of “Brat Loves Judy,” which has been renewed for a second season, premiering this June on WE tv.

Brat gushed about her lady, saying, “I met somebody that made me want to be so out loud and tell everybody and scream it from the mountaintops. So, I’m very grateful for that. It was like a weight lifted. I promise you, she was sent to me by God.”

Brat came out in 2020, crediting Dupart with helping her be more open about her life. She said, “She’s the person who completes me. She gives me courage. She inspires me, and she makes me fearless. She makes me not afraid.”

Brat went on, “I think it’s important that people express how they really feel. So many people live for other people and they live by the judgment of other people. I think it’s very important to live for yourself. Whatever makes you happy, don’t suppress it. Don’t hide it. You only live once.”

The pair are planning to celebrate their marriage with a honeymoon in Turks and Caicos.

They are also expecting their first child together, announcing the news in January. On Instagram, Da Brat posted a pic of herself wrapping her arms around Jesseca, with the caption, “We are EXTENDING the family.”

Of her impending motherhood, Brat admitted, “It makes me nervous, but it makes me excited, too. It’s all this excited nervousness. Oh, my goodness. We talk a lot about it. We pray about it. We want to raise the most beautiful, respectful, loving child and we want our child to carry out our legacy. This child is going to be loved unlike ever before and spoiled unlike ever before, but in a good way."