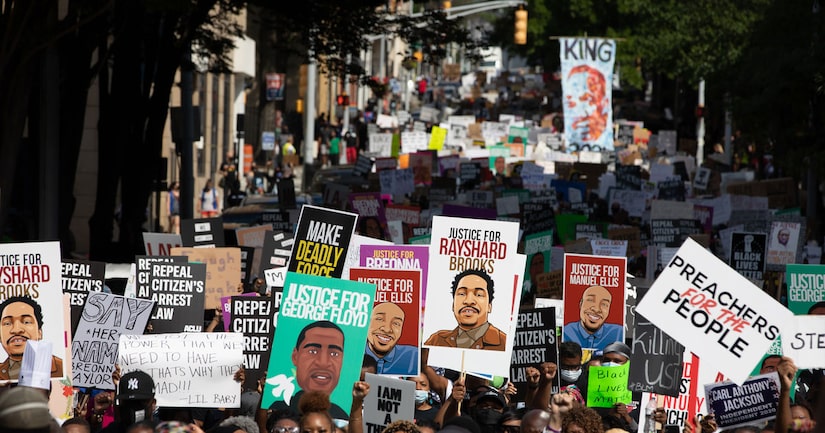 On Friday, an African-American man, Rayshard Brooks, 27, was killed by Atlanta police at a Wendy's drive-thru.

According to the Georgia Bureau of Investigation, officers found Brooks asleep in his car, which was parked in the drive-thru. After Brooks failed a sobriety test, police attempted to arrest him, but he “resisted and a struggle ensued.”

The GBI revealed more details after reviewing surveillance video and social media videos. After further examination, they said, “During a physical struggle with officers, Brooks obtained one of the officer's Tasers and began to flee from the scene. Officers pursued Brooks on foot and during the chase, Brooks turned and pointed the Taser at the officer. The officer fired his weapon, striking Brooks.”

Brooks was taken to a hospital, but died from his injuries.

According to Brooks' autopsy, he suffered two gunshot wounds to his back and died of organ injuries and blood loss. His death has been listed as a homicide.

Atlanta's police chief, Erika Shields, has also resigned. In a statement, Shields said, "I have faith in the mayor, and it is time for the city to move forward and build trust between law enforcement and the communities they serve."

Brooks' wife Tomika Miller fell to her knees when she heard the news of his killing. She told CBS News, “It was murder — that was not justified. He was shot running away. He wasn't dangerous. He wasn't coming at them in any kind of way to where they felt a threat. They shouldn't have felt threatened."

According to Brooks' family attorney, L. Chris Stewart, Brooks was planning to take his 8-year-old daughter skating for her birthday, but never made it home. He said, “She had her birthday dress on. She was waiting for her dad to come pick her up and take her skating.”

After the shooting, crowds gathered to protest his death. FOX5 Atlanta reported that the Wendy's where Brooks died was also set ablaze. Atlanta police are looking for a white female suspect who was captured on video, wearing a mask, appearing to set the fire.

Many big names, including Kim Kardashian, T.I. and Justin Timberlake, expressed their outrage over Brooks' death.

On Instagram, Timberlake shared a photo of Brooks, saying, “As a dad, this photo hurts. #RayshardBrooks was a father of three girls... 1, 2 and 8 years old. He should not be dead."

Also mentioning the deaths of Riah Milton, Dominique Fells, and Robert Fuller, Timberlake reiterated, “This week, these four innocent people became victims of racism, violence, and intolerance. And we're still waiting for Justice for #BreonnaTaylor. I'm heartbroken for their families and for this country.”

Bruno Mars also noted that he was “sick” after hearing about Brooks' killing. Criticizing the police, he tweeted, “They could've easily called someone to take him home and protect his life instead of shooting him in the back like some chumps. I'm sick.”

Billie Eilish was “f**king angry” after seeing video of Brooks being killed. Along with posting footage, she wrote on Instagram, “man F**k. watching this video made me so f**king angry. F**k THIS S**T. JUSTICE FOR RAYSHARD BROOKS. F**k THIS SH******T. #justiceforrayshard !!!! WHY ISNT EVERYONE TALKING ABOUT THIS??"

Billie's brother Finneas also wrote, “Justice for Rayshard. This is so f**ked up man. And such a good example of EXACTLY what's so f**ked up about the police in America. Asleep in his car in a parking lot. Shot to death. Don't let yourself be numb to this. Don't let the world stay this way.”