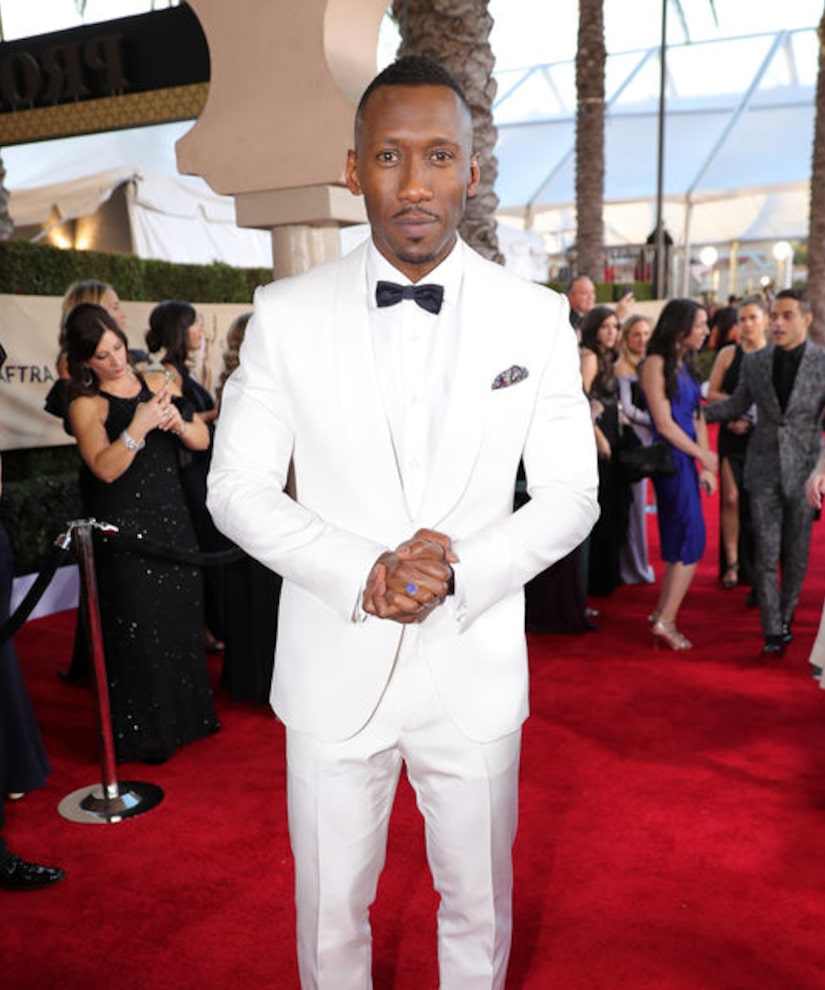 Donald Trump was the hot topic at the 23rd Screen Actors Guild Awards.

Many celebrities on the red carpet told “Extra” how they feel about President Trump after his first week in office, and expressed opinions on his controversial executive orders, including the temporary ban placed on immigrants from seven majority-Muslim countries from entering the U.S.

Mahershala Ali, who won Outstanding Performance by a Male Actor in a Supporting Role for “Moonlight,” spoke about converting to Islam in his acceptance speech. He gave his thoughts to “Extra” on Trump's actions so far, saying, “I just want to… to everybody out there who is… is having a very difficult time right now, I just want to send them peace.”

Natalie Portman praised the protesters who have raised their voices against Trump, saying, "We are really going through an identity crisis right now as a country and it's very heartening to see so many Americans taking to the streets and raising their voices and in a very peaceful way saying, 'This is not the kind of message we want to send out. This is not the kind of country we want to be with this man as president and the way he is behaving.'” She added, "We want to reach out in love and acceptance and make everyone's lives better, not be discriminating… and dividing people.”

Sarah Paulson was joined by Marcia Clark, the woman she played on “The People v. O.J. Simpson: American Crime Story," telling “Extra's” Charissa Thompson the two have been discussing the political headlines. “We were discussing it in the car here, how to be in the mood of celebrating something that can be sometimes filled with frivolity — we're talking about dresses and diamonds, and at the same time our responsibility as performers is about communication and being a vessel through which you can express the human experience. So, we've got to be here and participate in this, but with consciousness."

“Hidden Figures" actress Octavia Spencer spoke with “Extra's” Renee Bargh and Adam Glassman, sharing, “We are still waiting for Donald Trump to demonstrate how he will represent all of the people. For those people who have great concerns, the ACLU is there, and they should join the movement, you know, just to ensure, you know, that their voices will be heard.”

Julia Louis-Dreyfus has played an aspirant to the highest office in the land on TV for years. She made sure her voice was heard, saying, "I was at the Women's March here in Los Angeles, and I was very happy to be a part of it and I'm happy to be a part of the RESIST movement because in my view, [Donald Trump's] agenda is un-American.” She went on to say, “I think people are waking up to, like, 'Wait, what?'” The actress said she doesn't think Trump even deserves an F grade so far, asking, “Is there anything less than F?”

Riz Ahmed, the star of HBO's “The Night Of,” weighed in on the current administration, too, saying, “I really think that what makes America great is, you know, there's been a lot of talk about making America great again. What makes America great? What makes me want to come here and work? What made you come here to this country and work? What makes people from all over the world come together? And what makes America great is its tolerance and its sense of freedom and the idea that anyone from any background has got the same chance, you know?” He continued, sharing, "Once we start removing that from the idea of America, I think not just America but the whole world will lose something very special and very inspirational… Seems to me there are many people that disagree with these current measures, and I would say, you know, make your impact felt.”

Jeffrey Tambor, who plays a transgender woman on "Transparent," told "Extra," "My hope for the LGBTQ community will be the progress that's being made will be able to be made continually and we will not go retrograde, and so my hope is very much that if any politician is looking at me right now: Protect us, let's keep going forward.”