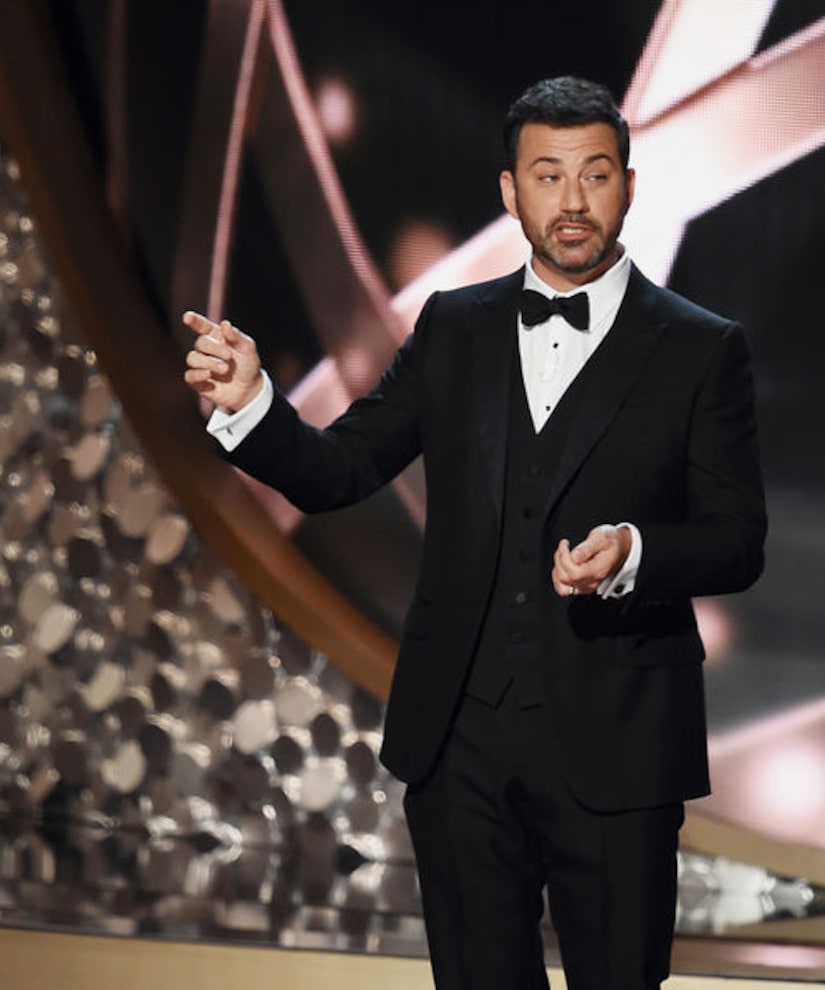 Host Jimmy Kimmel is taking center stage as the 2016 Emmys are handed out... and we are there to give you running commentary of tonight's festivities!

10:58 p.m.: And that's a wrap! Jimmy Kimmel joked about finishing the show before the election came.

10:49 p.m.: Larry David told the crowd, "Look at this, I'm presenting." He joked, "How hard can it be?" One of the requirements for presenters was to act interested, he claimed, which he knows how to do from going on dates. He went on to present Outstanding Comedy Series. The award went to "Veep."

10:42 p.m.: Kiefer Sutherland presented the Lead Actress in a Drama Series award to "Orphan Black's" Tatiana Maslany, who used her phone to help remind her of the people she needed to thank.

10:38 p.m.: Allison Janney showed off her legs in a high-slit gown while presenting Lead Actor in a Drama Series. And the Emmy goes to Rami Malek for "Mr. Robot." He told the audience, "Please tell me you're seeing this, too." He wanted to honor the "Elliot" in "all of us."

10:25 p.m.: Kimmel introduced Taraji P. Henson, who stunned in a red-hot dress. She presented the award for Outstanding Supporting Actor in a Drama Series, which went to Ben Mendelsohn, who was not able to attend. Taraji accepted the award on his behalf.

10:17 p.m.: Michael Weatherly and Minnie Driver came onstage to hand out the award for Outstanding Supporting Actress in a Drama Series. And the winner was Maggie Smith, who wasn't able to attend. Kimmel came onstage and took the Emmy, which he claimed would be in the "lost and found." The next award presented was Best Directing in a Drama Series, which was won by Miguel Sapochnik for "Game of Thrones."

10:13 p.m.: Kimmel made the nominees in the star-studded audience to think about who didn't vote for them at the show.

10:04 p.m.: The next award given out was Outstanding Variety Sketch Series, which was won by "Key & Peele." Keegan-Michael Key was seen dancing his way to the stage.

10:00 p.m.: Jimmy Kimmel changed into a white tuxedo and introduced Laverne Cox. Cox thanked Jeffrey Tambor for his acceptance speech and introduced the nominees for Outstanding Directing in a Variety Special. And the Emmy goes to Thomas Kail for "Grease: Live."

9:53 v: Jimmy Kimmel is joined onstage by his faux nemesis Matt Damon, who poked fun at him for not winning the last category. Matt told Kimmel while eating an apple that Kimmel losing "makes a lot of sense." Matt urged the crowd to cheer up Jimmy, who he called a "big loser."

9:49 p.m.: Andy Samberg and Kit Harington made the crowd laugh while delivering lines meant to be used in next year's Emmys promos, all over-the-top stuff, including Kit getting down on one knee to propose marriage. They presented the Outstanding Variety Series award to "Last Week Tonight with John Oliver." John Oliver told the audience to "settle down, children."

9:45 p.m.: Before presenting an award, Aziz Ansari thanked his parents, who he forgot to mention earlier in his acceptance speech. He went on to hand out the award for Variety Special Writing to Patton Oswalt. He told the crowd that he wasn't expecting to win.

9:38 p.m.: Keri Russell and Liev Schreiber took the stage to present the award for Outstanding Limited Series, which was won by "The People v. O.J. Simpson: American Crime Story." Ryan Murphy took the mic while being joined onstage by the cast and crew.

9:36 p.m.: Kimmel told the audience that Cochran was probably "smiling down at us." The show segued to the award for Outstanding TV Movie, which was won by "Sherlock."

9:33 p.m.: Tina Fey and Amy Poehler, co-winners of Outstanding Guest Actress in a Comedy Series, came onstage with their Emmy award, which was cut in half. They went to give out an award to Courtney B. Vance, who took home the Outstanding Lead Actor in a Mini-series for his portrayal of Johnnie Cochran in "The People v. O.J. Simpson: American Crime Story." He thanked his wife, Angela Bassett.

9:25 p.m.: Claire Danes and Bryan Cranston came onstage to present an award to Sarah Paulson, who took home the award for Outstanding Actress in a Limited Series for her portrayal of Marcia Clark in "The People v. O.J. Simpson: American Crime Story." In her speech, she told Sterling K. Brown, "I am holding this because of you." Before she stepped off the stage, she gave a sweet shout-out to her girlfriend Holland Taylor with a simple "I love you."

9:21 p.m.: Terrence Howard joked about forgetting to hold his stomach in before presenting the Best Supporting Actor in a Limited Series award to Sterling K. Brown for his work on "The People v. O.J. Simpson: American Crime Story." He thanked Ryan Murphy for "giving a brother a chance." He thanked Sarah Paulson and his wife, "the hottest chick in the game." 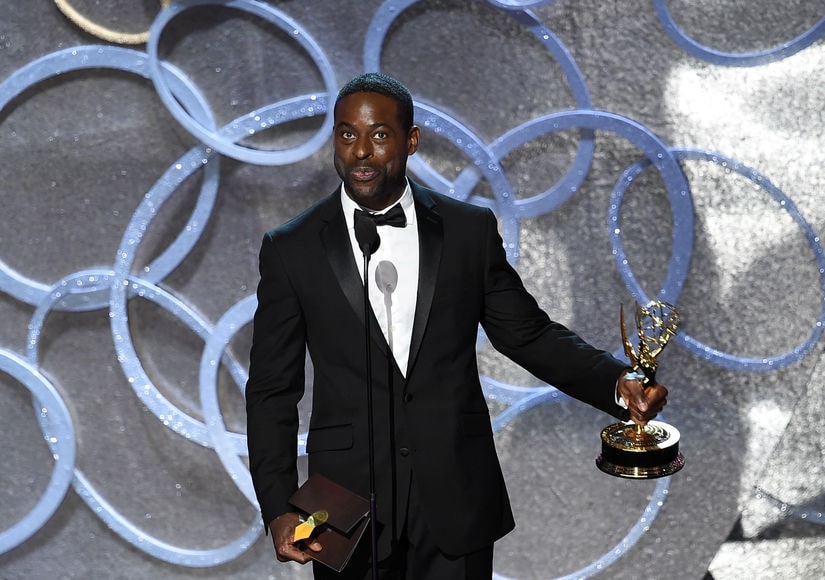 9:13 p.m.: Tom Hiddleston and Priyanka Chopra took the stage to present the award for Best Directing for a Limited Series or Movie and the award goes to Susanne Bier for her work on "The Night Manager." Tom and Susanne shared a sweet embrace onstage since they worked together on the show. 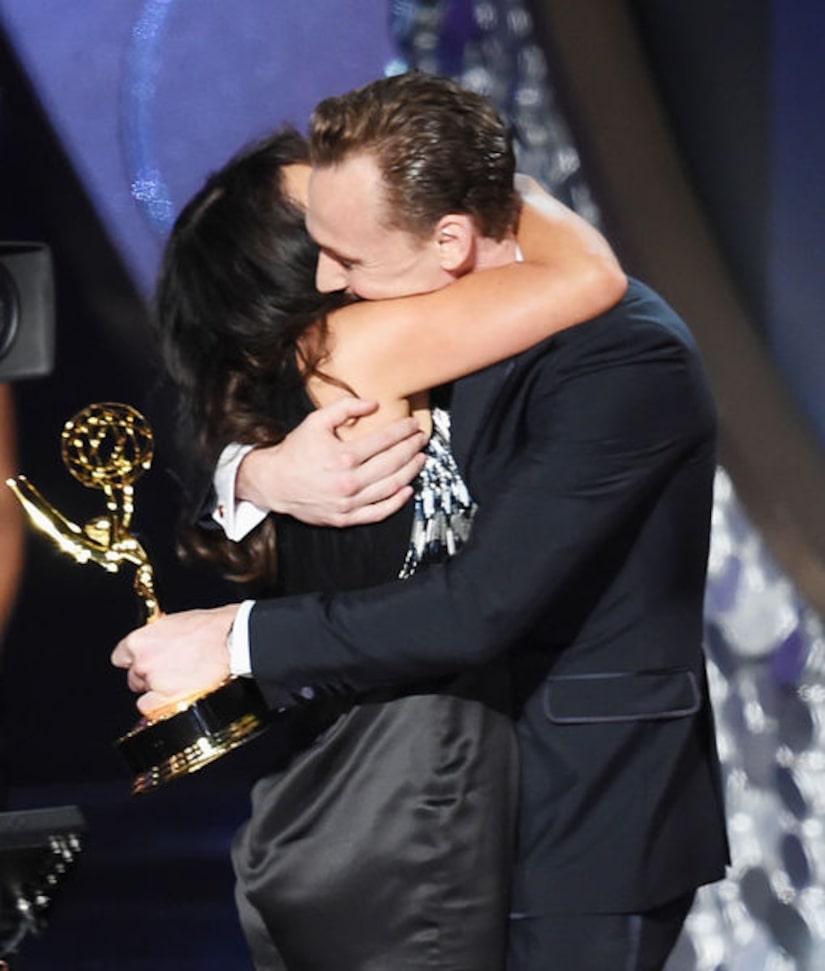 9:10 p.m.: Jimmy Kimmel makes the audience laugh while handing out juice boxes to them. He also put the spotlight on Cuba Gooding Jr. and Amy Schumer, who both got personal notes from Kimmel's mom.

9:09 p.m.: Regina King took home the Outstanding Supporting Actress in a Limited Series or Movie award for her work on "American Crime."

9:04 p.m.: Leslie Jones addressed her recent nude-photo leak onstage, saying she only wanted to feel "beautiful" before Kerry Washington and Tony Goldwyn took the stage to present the award for Best Writing in a Limited Series. The award was taken home by "The People v. O.J. Simpson: American Crime Story."

8:57 p.m.: Jimmy Kimmel joked about the large number of producers on "The Voice." Afterwards, the young cast of "Stranger Things" passed out food to the star-studded crowd, who he joked haven't eaten since Labor Day.

8:55 p.m.: America Ferrera and Mandy Moore share the stage to present the award for Outstanding Reality Series. And the Emmy goes to "The Voice." Mark Burnett joked that Jimmy Kimmel had been giving Hillary Clinton free advertising with his anti-Trump lines.

8:50 p.m.: James Corden takes the stage after the commercial break and hands out the award for Best Actor in a Comedy Series. The award goes to Jeffrey Tambor, his second consecutive win for "Transparent"! He thanked creator Jill Soloway for changing his life and showed his appreciation for his cast and Amazon. At the end of his speech, Tambor pleaded with the entertainment industry to give transgender talent a chance, saying he wouldn't be upset if he were the last cisgender male to play a female transgender character. 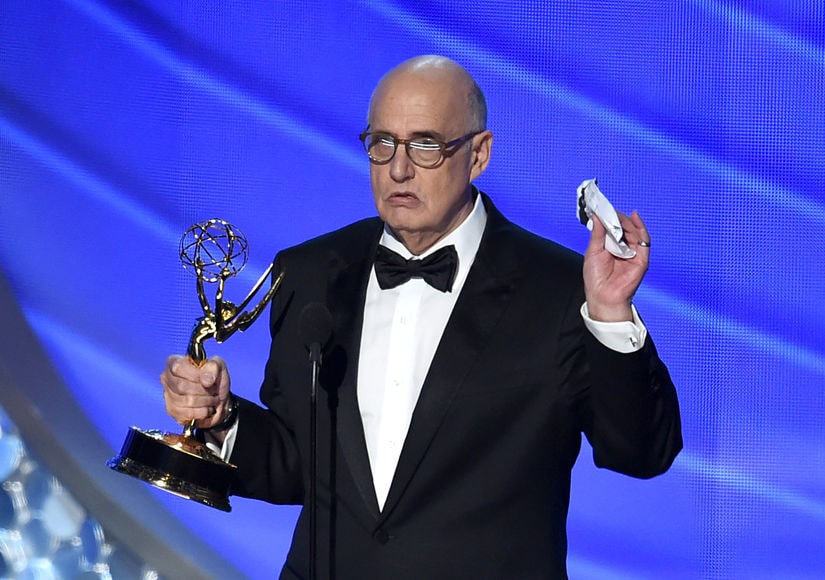 8:39 p.m.: The award for Lead Actress in a Comedy Series goes to Julia Louis-Dreyfus, her fifth consecutive win! The Emmy is a record-breaker, as Louis-Dreyfus just surpassed Candice Bergen and Mary Tyler Moore for most wins in the category. She made the audience laugh by apologizing for her part in creating the current political climate. At the end of her speech, she got emotional while thanking her father, who passed away on Friday. 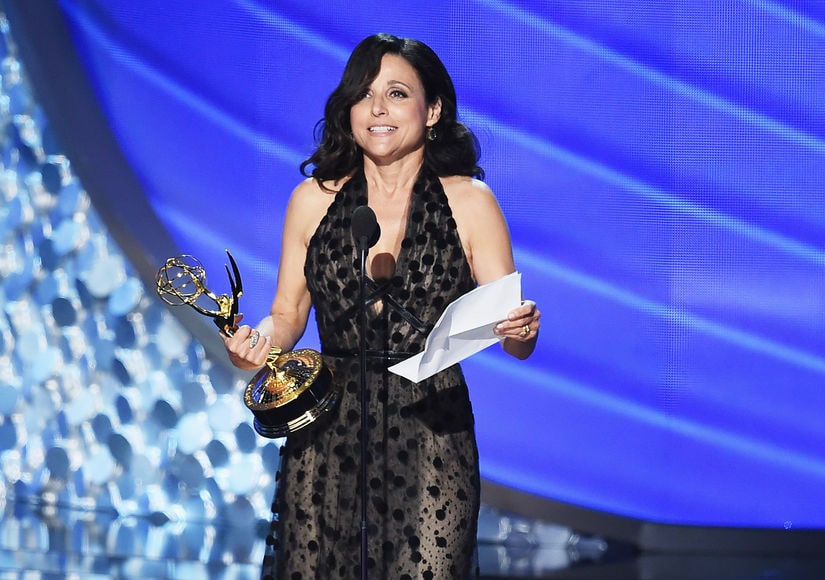 8:25 p.m.: Kimmel joked about having "too much diversity" after Ansari's win. He went on to introduce Kristen Bell and Joel McHale, who presented the award for Best Supporting Actress in a Comedy Series, with Kate McKinnon winning for "Saturday Night Live." McKinnon teared up onstage before giving her acceptance speech. She admitted "shaking" during her speech, thanking her family, Ellen DeGeneres, and Hillary Clinton. 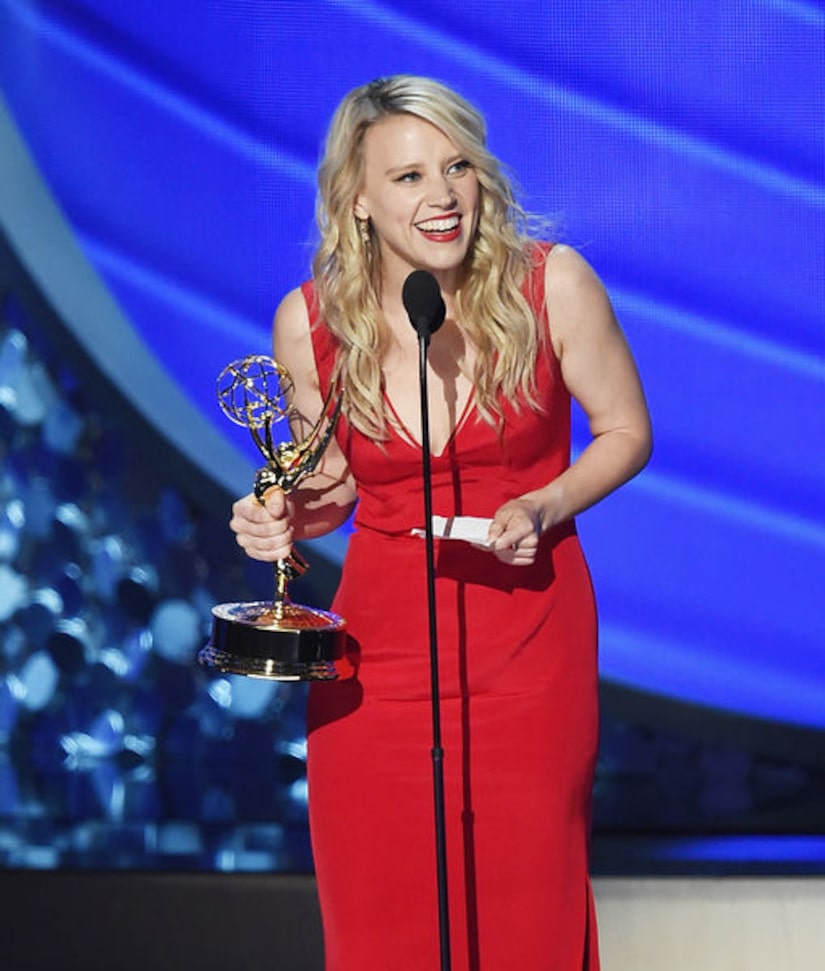 8:22 p.m.: Jimmy Kimmel introduces Matt LeBlanc and Julie Bowen, who present the award for Best Writing in a Comedy Series. The award goes to Aziz Ansari and Alan Yang for their work on Netflix show "Master of None." After Yang spoke, the music started playing before Ansari was able to speak. Ansari responded to the music by running off stage and into his front row seat. 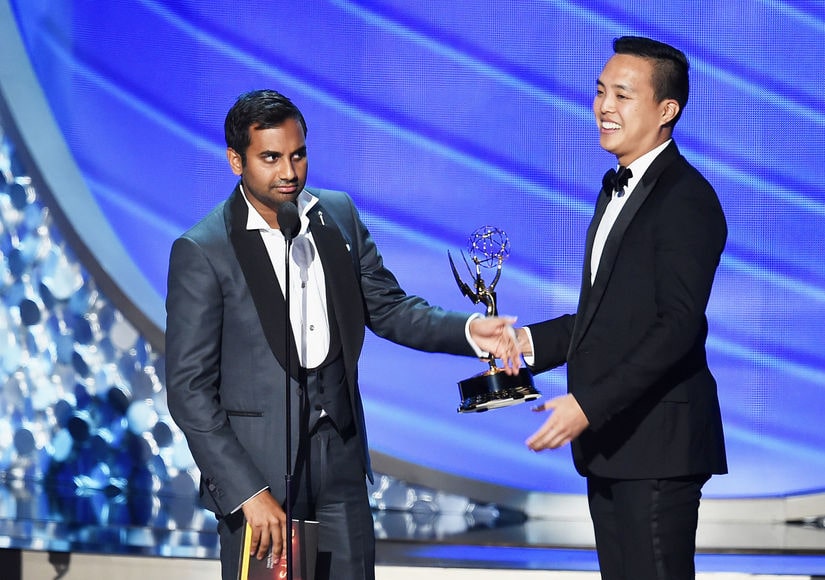 8:14 p.m.: Awww... Louie dedicated his award to his mom. He also thanked his father and siblings, and the list goes on and on. He wrapped up his acceptance speech with "God bless!"

8:12 p.m.: Anthony Anderson and Tracee Ellis Ross are onstage to present the first award — Best Supporting Actor in a Comedy Series. And the award goes to Louie Anderson for his (female) role in "Baskets"! 8:06 p.m.: After making the stage, Jimmy Kimmel poked fun at the cast of "The People v. O. J. Simpson: American Crime Story," including Sarah Paulson, John Travolta, and Cuba Gooding Jr. He also put the spotlight on the "diversity" at the show, telling the star-studded crowd to make a "connection" with each other. Kimmel moved on from the diversity topic with Donald Trump, who he joked was "rubbing up against his wife 'Malaria.'" At the end of the monologue, he made a reference to Trump's "Make America Great Again" slogan.

8:00 p.m.: It's just getting started! The show started off with a sketch with Jimmy Kimmel, who is having major problems getting to the show. The sketch features Julia Louis-Dreyfus, James Corden, and Jeb Bush, who all refuse to give him a ride! Eventually, Daenerys Targaryen from "GOT" gives him a ride on her dragon. 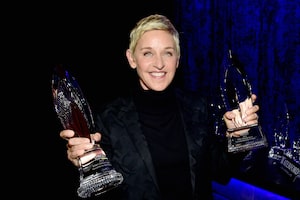 Ranking the Emmys! Best Host of All Time, Greatest Actor to Never Win and More 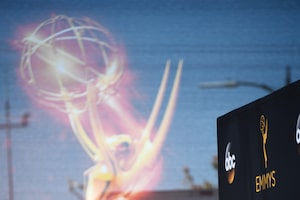 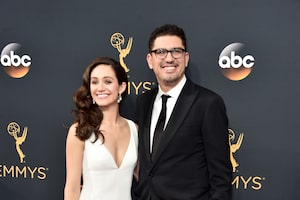