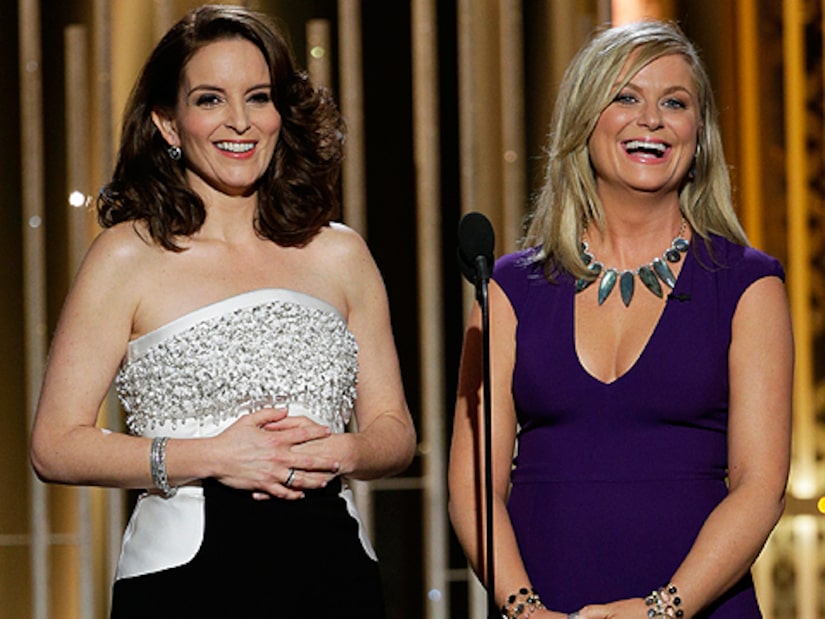 Hosts Tina Fey and Amy Poehler took center stage as the 2015 Golden Globes were handed out… and we were there to give you running commentary of Sunday night's festivities!

11:00PM: Presenter Meryl Streep says how much she is going to miss Tina and Amy... so true. She announces the big winner of the night, "Boyhood" for Best Motion Picture Drama!

10:53PM: Following Moore's win, Eddie Redmayne is named Best Actor in a Motion Picture Drama for his amazing performance as Stephen Hawking in "The Theory of Everything." 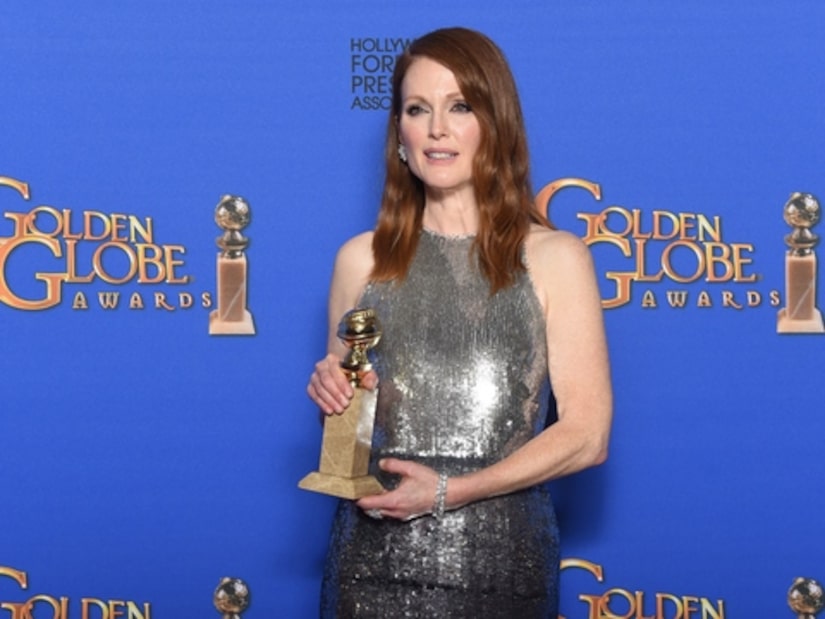 10:51PM: A scraggly-bearded Matthew McConaughey presents Julianne Moore the Globe award for Best Actress in a Motion Picture Drama for "Still Alice." Another poignant speech. Man, these A-listers are on it tonight! 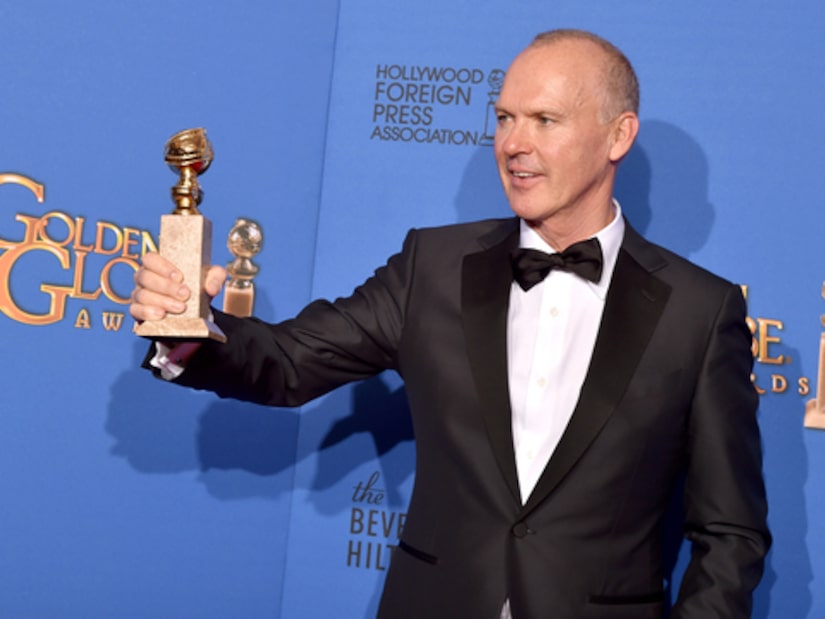 10:33PM: Yay! Michael Keaton wins Best Actor in a Motion Picture Drama for his turn in "Birdman." He just said his last name isn't really Keaton but Douglas, and then gets very emotional when he mentions his son.

10:26PM: Ruth Wilson wins Best Actress in a TV Drama for her turn in "The Affair." Well deserved.

10:23PM: Richard Linklater wins for Best Director for his superb "Boyhood." Another succinct and sweet speech, seems to be a theme. 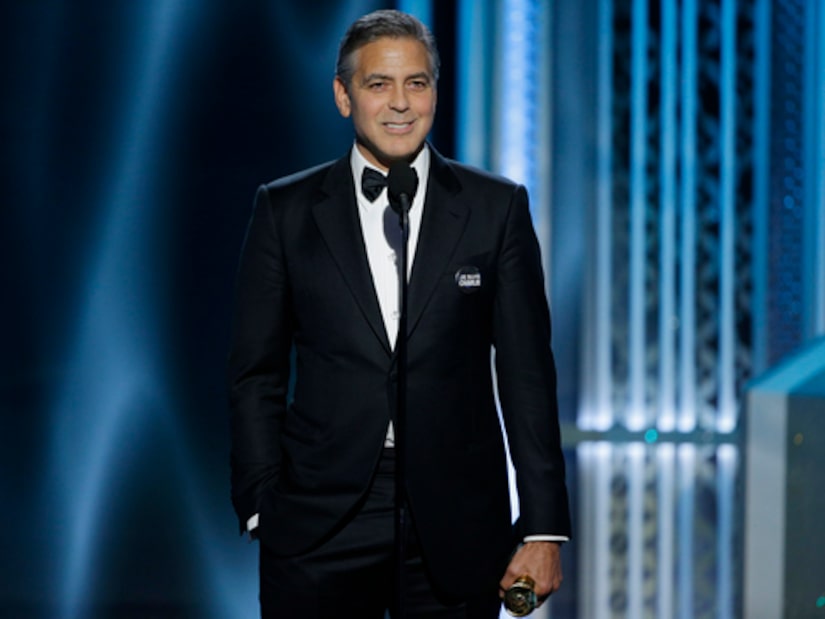 10:13PM: The gracious Clooney gives a heartfelt thanks. He also very sweetly praises his new wife, Amal, who looks absolutely stunning. "It's a humbling thing when you find somebody to love." What a classy couple.

10:07PM: Presenters Julianna Margulies and Don Cheadle riff on who has a better friendship with the Cecile B. DeMille recipient George Clooney. The Clooney clip montage is fantastic. 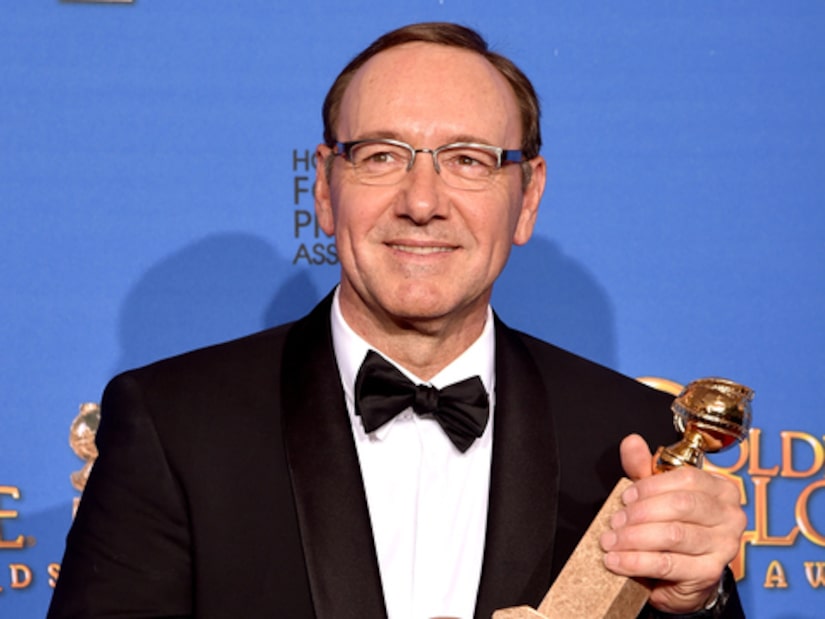 9:58PM: Kevin Spacey finally wins the Globe for Best Actor in a TV Drama for "House of Cards"! "This is just the beginning of my revenge... I can't believe I f**king won."

9:54PM: Showtime's stellar new show "The Affair" wins for Best TV Drama! Pay attention to some of these TV winners because you're going to have to check them out.

9:46PM: Maggie Gyllenhaal wins Best Actress in a TV Mini-Series or TV Movie for her performance in "The Honorable Woman." What a great and inspirational speech for actresses!

9:34PM: Wow, look how great presenters Lily Tomlin and Jane Fonda are! They announce Best Actor in a TV Comedy, which goes to Jeffrey Tambor for "Transparent"! He dedicates the award to the transgender community. I guess everyone needs to subscribe to Amazon Prime now. 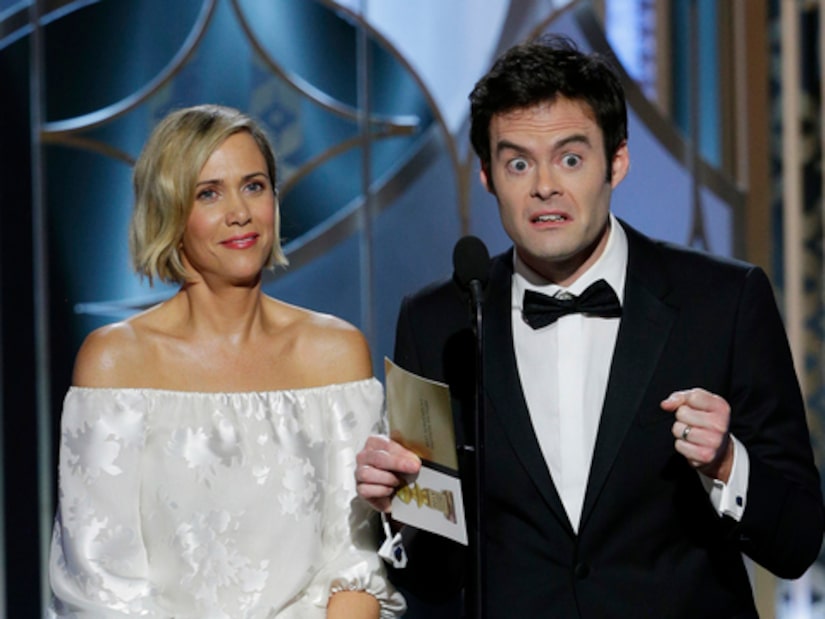 9:27PM: Presenters Kristen Wiig and Bill Hader present Best Screenplay. They are both amazed that every movie has a screenplay, reciting classic movie quotes... but slightly altered. The best part? Wiig trying to do a Robert de Niro impersonation. 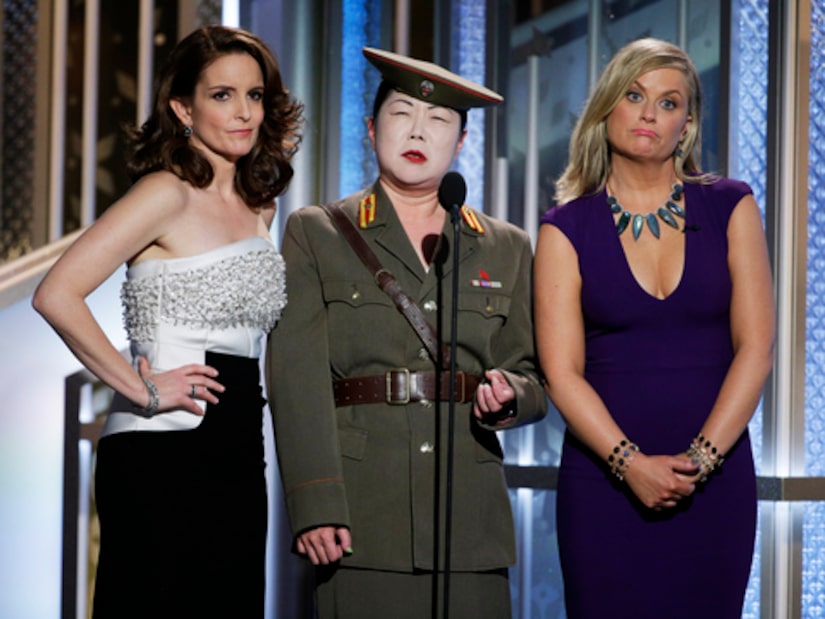 9:26PM: Cho Un Jong tells Tina and Amy that she does not like how the show is going. "No Dennis Rodman or basketball at all." Cho also thinks "Orange Is the New Black" isn't a comedy. "It's not ha ha funny."

9:13PM: It's presenter Kevin Hart's first time at the Golden Globes but he isn't there to talk about himself or his film "The Wedding Ringer," opening this Friday.

9:06PM: Gervais presents for Best Actress in a Musical or Comedy, which goes to Amy Adams for "Big Eyes." Earlier, in the opening monologue, Tina and Amy called out Emma Stone as someone with naturally big eyes. 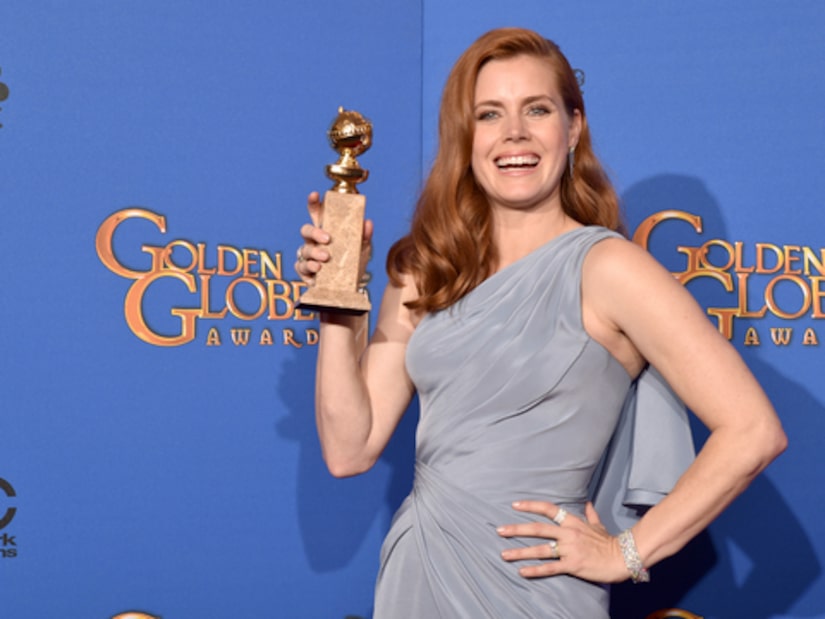 9:03PM: Presenter Ricky Gervais: "It's going well, isn't it? Let me not ruin it by saying anything," and then he goes on to sling a few appropriate insults.

9:00PM: Katie Holmes holds her own with Seth Meyers as they present for Best Supporting Actor in a TV Mini-Series. Matt Bomer wins for his performance in "The Normal Heart"!

8:53PM: Prince is at the Golden Globes! He present the Best Original Song, which goes to "Glory" from the film "Selma." Winners Common and John Legend accept the award, with an inspirational speech. It even makes Legend's wife Chrissy Teigen cry! 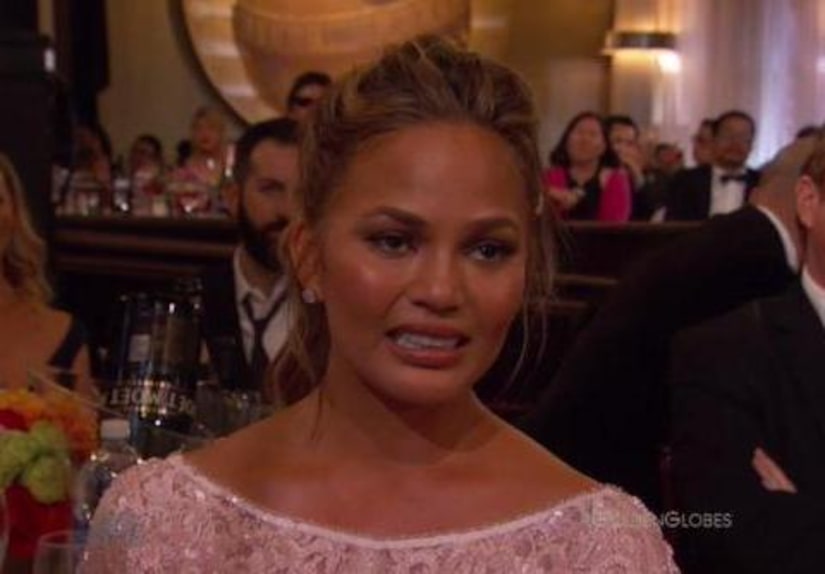 8:50PM: Best Score goes to "The Theory of Everything." 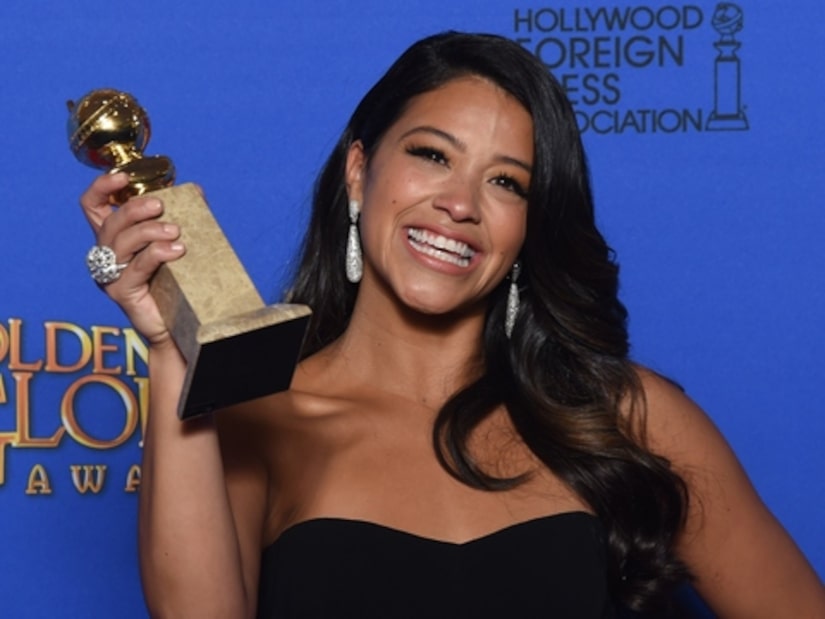 8:32PM: Margaret Cho as a non-smiling North Korean HFPA member in the audience is too much! Michael Keaton then takes a selfie of Meryl Streep and Cho, while Benedict Cumberbatch photobombs... the best!

8:25PM: Billy Bob Thornton wins for Best Actor in a TV Mini-Series or TV Movie for his turn in "Fargo"; he simply says "Thank you."

--Tina and Amy totally go there with the Bill Cosby jokes. First they talk about "Into the Woods" and how Sleeping Beauty really just thought she was having coffee with Bill Cosby. Then they hilariously try to imitate him, saying, "Put the pills in the PEOPLE!" Too soon or spot on?

--The two BFFs also play a hysterical game of Who'd You Rather?, calling out two actors they'd want to have sex with. The best? "Colin Farrell or Colin Firth" Amy says, "Farrell all day long," while Tina replies, "Firth for a polite amount of time."

--Tina: "Hello all you despicable, spoiled, minimally talented brats!... We are celebrating all the movies North Korea were okay with!"

--Amy: “The biggest story in Hollywood this year was when North Korea threatened an attack if Sony Pictures released 'The Interview', forcing us all to pretend we wanted to see it.” Tina: “North Korea referred to 'The Interview' as 'absolutely intolerable' and a 'wanton act of terror.' Even more amazing, not the worst review the movie got.”

--Tina: "Oprah is here! And she's put cranberry candles under all your seats!"

--Amy: "Reese Witherspoon did all her own walking in 'Wild.' So brave. And Andy Serkis was great as her backpack.”

--Tina: 'Selma' is the movie about the Civil Rights march in the '60s, which totally worked and now everything is fine."

--Amy: "Steve Carell plays a paranoid, murderous billionaire in 'Foxcatcher,' but in real life, he is really a paranoid, murderous MILLIONAIRE." A great reaction from Carell in the audience." Tina adds, “Steve Carell's 'Foxcatcher' look took two hours to put on, including his hairstyling and make-up. Just for comparison, it took me three hours today to prepare for my role as human woman."

--After listing all of Amal Clooney's amazing accomplishments as a humanitarian and diplomat, Tina adds, "And her HUSBAND is winning a Lifetime Achievement award... only in Hollywood."

--Amy: "It's great to see Patricia Arquette here! She's nominated for "Boyhood," which proves that there are great roles for women over 40 so long as you are hired under 40."

8:00PM - Tina and Amy come onto the Globes stage for their third and final time! 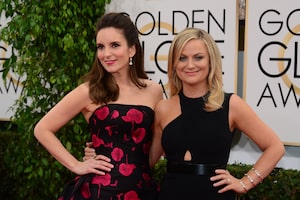