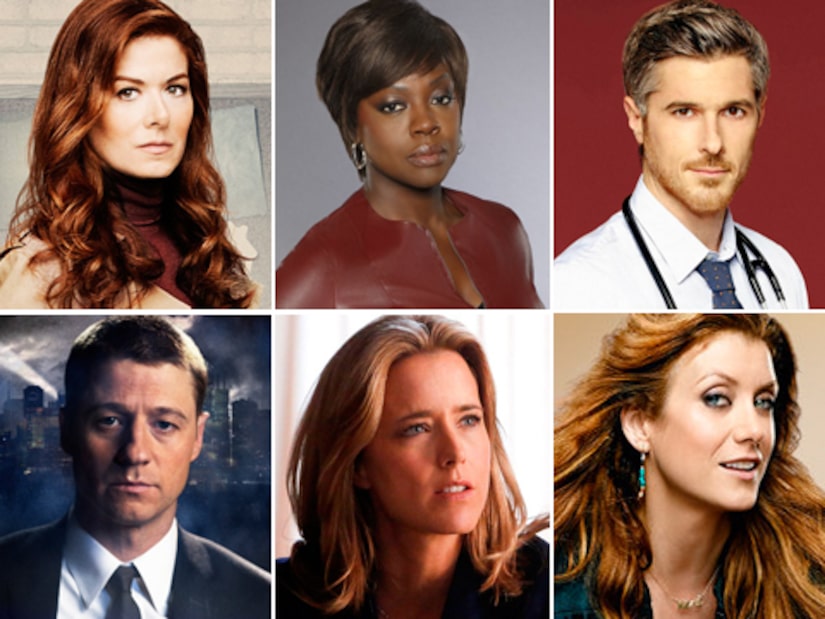 Fall is here, and so is the new lineup for primetime TV!

Check out our list of hot new shows for the season, from Téa Leoni's new CBS political drama “Madam Secretary” to Debra Messing's NBC comedy “The Mysteries of Laura.”

Who: Octavia Spencer and Dave Annable

What: “Red Band Society” is a provocative, unconventional and unique coming-of-age dramedy about a group of rule-bending friends and the adults who mentor them through the ups and downs of adolescence in Los Angeles' Ocean Park Hospital.

Who: Téa Leoni and Tim Daly

What: “Madam Secretary” stars Tèa Leoni as Elizabeth McCord, the shrewd, determined, newly appointed Secretary of State who drives international diplomacy, battles office politics and circumvents protocol as she negotiates global and domestic issues, both at the White House and at home.

What: “Gotham” is an origin story of the great DC Comics supervillains and vigilantes, revealing an entirely new chapter that has never been told.

What: The brilliant, charismatic and seductive Professor Annalise Keating gets entangled with four law students from her class “How to Get Away with Murder.” Little do they know that they will have to apply what they learned to real life, in this masterful, sexy, suspense-driven legal thriller.

What: Debra Messing stars as Laura Diamond, a brilliant NYPD homicide detective who balances her "Columbo" day job with a crazy family life that includes two unruly twin boys and a soon-to-be ex-husband -- also a cop -- who just can't seem to sign the divorce papers.

Who: Karen Gillan and John Cho

What: “Instafamous” Eliza Dooley has 263,000 followers who hang on to her every post, tweet and selfie. But one lonely day she has a revelation: being friended is not the same as having actual friends. She asks marketing guru Henry (John Cho) to "rebrand" her self-obsessed reputation and teach her how to connect with people in the real world.

What: Wild child Rebecca Wright knows how to have a good time, but she also happens to be one of L.A.'s toughest and most respected criminal court judges.

What: “The Affair” explores the emotional effects of an extramarital relationship between Noah, a dissolute schoolteacher and novelist, and Alison, a waitress trying to piece her life and marriage back together in the wake of a tragedy.

Who: Katherine Heigl and Alfre Woodard

What: Each day the president is faced with dozens of life-and-death decisions, and to prioritize the biggest international crises facing the country, one top CIA analyst -- Charleston Tucker -- assembles the President's Daily Briefing (PDB). This list of the most vital security issues facing the nation brings with it moral and political judgment calls for Charleston and her trusted group of brilliant analysts at the agency.