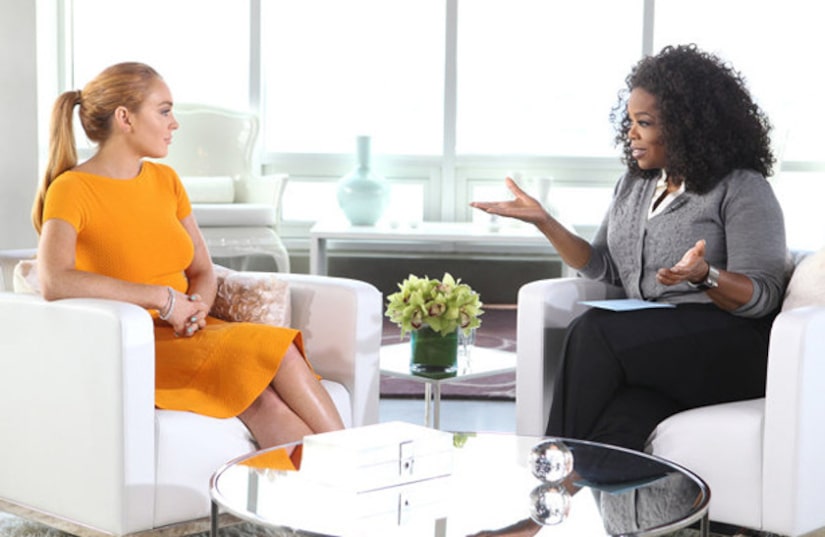 When Oprah sat down with Lindsay Lohan for her tell-all interview on Sunday, nothing was off limits -- from drugs to her infamous family. Did you miss the episode of “Oprah's Next Chapter”? Check out our list of LiLo's five biggest confessions.

1. Yes, she's an addict.
Oprah asked Lohan point blank if she is an addict, and the former child star quickly answered “yeah,” before explaining that alcohol was her go-to drug, and naming cocaine and Adderall among her past vices.

She revealed, “I was terrified of being judged,” later adding, "It allowed me to drink more. It was like a party thing. People would have it and I would do it. I snorted it. I've never injected anything other than getting B12 shots. It went hand in hand with drinking and partying."

She added, "And I think that that was subconsciously being put out there by me, just by my actions, or lack thereof. I think it was just to find some peace and just have no choice but to just sit and be."

4. Her mom and dad never exploited her.
"Nobody's perfect. I love my parents," Lindsay said of stories that she was exploited by parents Michael and Dina. "I'm not going to say that certain situations I would have preferred to be handled differently, to be kept within the family and private."

5. “The Canyons” star is “very spiritual.”
"I am a very spiritual person and I've become more spiritual as time has gone on," later adding, "You know there are so many powers greater than me in the world.”

Look for Lindsay on OWN again next year when she stars in an eight-episode docuseries for the network.