The 82nd Academy Awards, hosted by Steve Martin and Alex Baldwin, named "The Hurt Locker" as the night's big winner. At three and half hours, there were SOME choice show highlights: 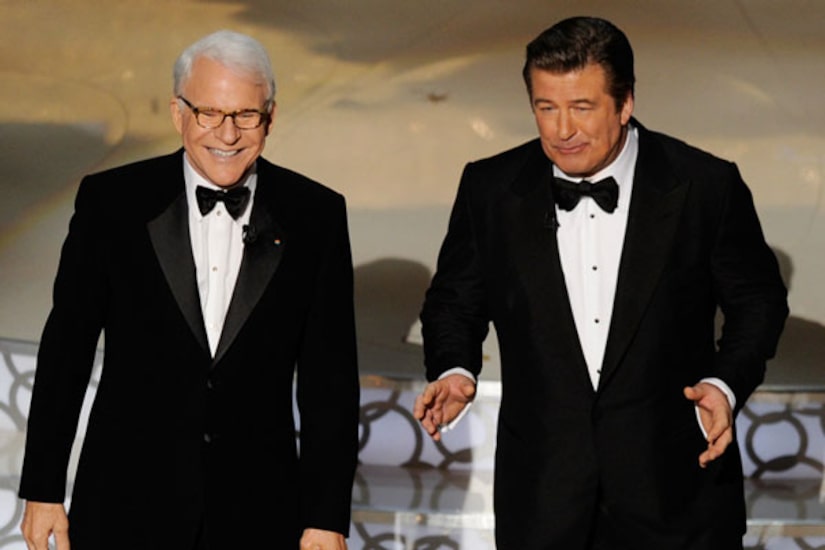 Best Lines from the Show's Hosts:

"What's five times two?" --Steve Martin trying to figure out how they could expand the Best Picture nominees from five to 10.

"I have something in common with you; in my first film I, too, was born a poor black child!" -- Martin to "Precious" Best Actress nominee Gabourey Sidibe.

"Here are the 'Inglourious Basterds' -- and over here, the people who made the movie!" --Steve Martin, who added that if Christophe Waltz's character was looking for Jews, gesturing to the audience, "You've hit the motherload!"

"She sent him a gift basket with a timer in it." --Baldwin, on what "The Hurt Locker" Kathryn Bigelow sent ex-husband James Cameron as a congratulations gift for his nomination.

"This was a better idea in rehearsal" --Ben Stiller presenting the Best Makeup Oscar, dressed and talking like a Na'vi from "Avatar."

"It's collaboration -- between handsome, gifted people and a sickly, little mole people." -- Robert Downey Jr. to his co-presenter Tina Fey, about the importance of a great screenplay.

"I'm petitioning to put the cap on Oscar nominations at 16, so no one has to stand here again and say 'Meryl Streep is quite simply the best.'" --Stanley Tucci to his "Julie & Julia" co-star.

The tribute to director John Hughes, with all his young stars -- including Molly Ringwald, Macaulay Culkin and Ally Sheedy -- paying their respects to the man that started their careers.

Celebrating the Best Actor and Actress nominees by having other actors, who have worked with them, tell their little anecdotes.

Best Supporting Actress winner Mo'Nique thanking those black women who have won Oscars before her, in paving the way.

"I already have two of these." --Sandy Powell, on winning her third Oscar for Best Costume for her work on "The Young Victoria."

"My mom and dad loved showbiz so much!... You are honoring them as much as me." --Best Actor winner Jeff Bridges, on thanking his family roots.

"Did I earn this or did I just wear y'all down?" --Best Actress winner Sandra Bullock, who ended by thanking everyone, including "her lover Meryl Streep."

And for a crazy moment...