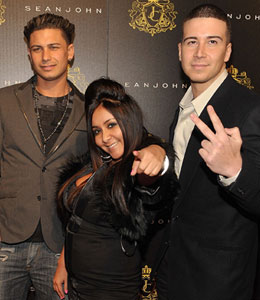 MTV has renewed "Jersey Shore" and announced 12 episodes will begin airing this summer.

Mike "The Situation" Sorrentino, Nicole "Snooki" Polizzi, Jenni "JWoww" Farley, Vinny Guadagnino, Sammi "Sweetheart" Giancola, Ronnie Ortiz-Magro and Paul "DJ Pauly D" DelVecchio won't be returning to the beach house in Seaside Heights. According to a network statement, the group will "escape the cold northeast and find themselves in a new destination."

"Our audience has fallen in love with 'Jersey Shore' and its amazing cast who have really grown together as a family," Tony DiSanto, MTV's President of Programming, says in a statement. "That bond gives the show its heart, and we're thrilled to reunite these friends."

Hannah Brown Had Windmill Sex with Which ‘Bachelorette’… 6

‘The Bachelor’ Alum Caila Quinn Cancels Her Wedding in Italy 8

Why the Avengers Are Fighting Back Against Chris Pratt’s Online…