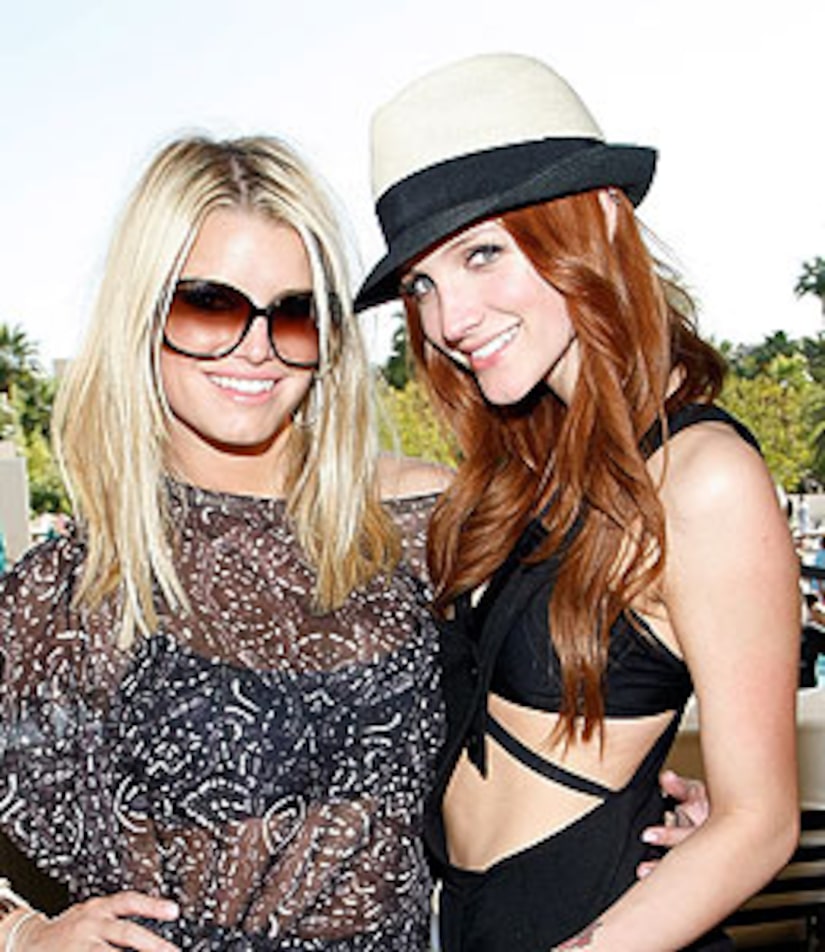 One week after it is announced that Ashlee Simpson-Wentz will leave "Melrose Place," Jessica Simpson writes on her Twitter that the show is "crap."

"Catching up on MP. Who writes this crap?" Jessica wrote on her Twitter page. "I have had bad scripts to work with, but this?"

See photos of Jessica Simpson through the years

Simpson, 29, continues, crediting her sister's short-lived role for generating buzz for the show. "Thank God my sister is amazing and got you some press."

Ouch! Jessica's zinger comes after Simpson-Wentz, 25, released a statement to People magazine confirming her split from the revamped show. "Having the chance to play Violet on Melrose Place has been a thrill," Ashlee's statement reads. "Although I always knew her story would come to a final, insanely unpredictable end, playing a creepy, unstable character was something I always wanted to do, so I jumped at the chance. Thanks to the CW and the entire cast and crew of 'Melrose Place' for allowing me this opportunity."

Check out pictures of Ashlee through the years

Producers for the show announced in September that Heather Locklear, 47, will reprise her role as bad girl Amanda Woodward on "Melrose Place."

Melrose Place is Back!

According to “Entertainment Weekly,” the first season will feature a murder mystery involving characters Sydney Andrews (Laura Leighton) and Dr. Michael Mancini (Thomas Calabro) from the original series, as well as a crop of new residents.

Back from the Dead

Someone murdered Sydney! Again! Sources confirmed to “Entertainment Weekly” that the dead body found floating face-down in Melrose's trademark pool in the opening minutes, belongs to none other than Sydney Andrews (Laura Leighton). She was thought to be dead in 1997 at the end of the original show's fifth season, now she's returned to reportedly become the current building's landlord.

Sources tell “Entertainment Weekly” that Leighton will be sticking around. An insider confirms that Sydney will be seen via flashback in multiple episodes. Said flashbacks will explain where's she's been and what really happened after she became roadkill more than a decade ago.

The Doctor is In

Thomas Calabro (Dr. Michael Mancini) was the only original cast member to remain on the series throughout its entire run (1992-99). He is returning to the new series as a guest star.

Shaun Sipos plays David Breck, one of the lead characters in “Melrose Place” (2009), and is reportedly Dr. Michael Mancini's son.

Daphne Zuniga, who played Jo Reynolds in the original series (1992-96) is reportedly returning as guest star for the new series.

Josie Bissett, who played Jane Andrews in the original “Melrose Place” (1992-99) is also reportedly returning as a guest star for the show's new series.

The Return of Amanda

The new bosses of “Melrose Place” had originally wanted Heather Locklear to reprise her role as Amanda Woodward in the pilot, but talks fell through earlier this year. While the CW officially has no comment, reports surfaced in August that suggest Locklear is indeed in talks to appear on the new Melrose Place as Amanda Woodward.