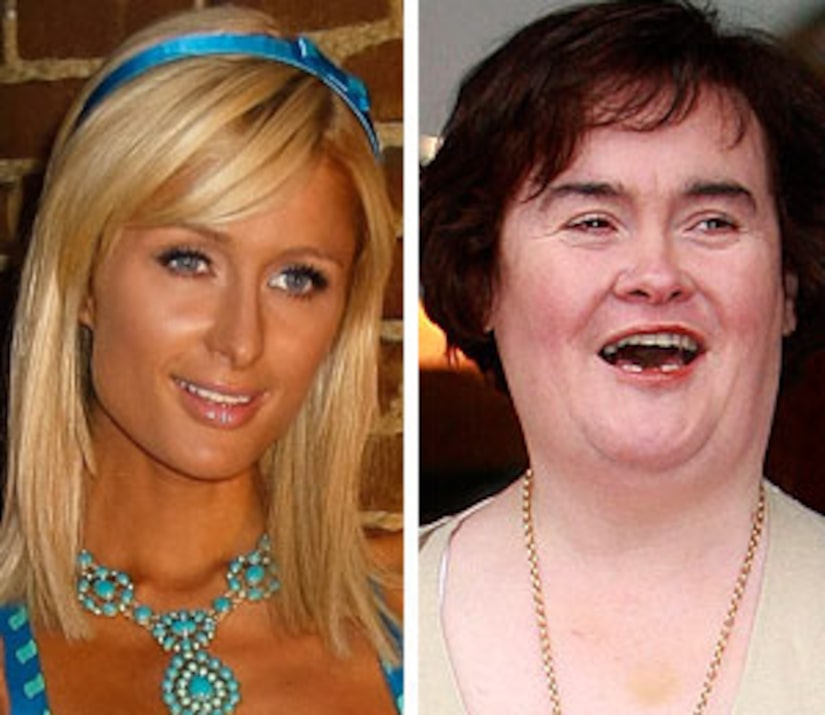 World-famous Paris Hilton knows a thing or two about stepping in front of cameras, so when "Extra" prompted the heiress to give Susan Boyle advice for paparazzi shots, she jumped at the chance!

"I think Susan has an amazing voice, but she needs to work on the pose," Paris says of the "Britain's Got Talent" star. "I think she should come up with something new... since she's such a huge celebrity now... I suggest getting a stylist. She could look really hot if she just wore some pretty dresses."

The "Paris Hilton is My New BFF" star reveals to "Extra" that she is all about the Twitter craze, but by the time she jumped on the bandwagon she couldn't use her own name! "Mine is at @BabyGirlParis. There's so many fakes... I tried to get ParisHilton but there are already 100 fake Paris Hiltons so I don't write the fake ones... I love Twitter."

Eminem made headlines last week when he jokingly stormed out of the MTV Movie Awards after comedian Sacha Baron Cohen's character Bruno rear-ended his face! Paris confirms to "Extra" that the show's producer approached her about doing a fake segment, but she decided to pass. "I love Mark Burnett... He didn't really tell me what it was, but he asked if I wanted to be involved in something that was going to be crazy and, like, a fight might break out," Paris reveals. "I was like, 'All right. I don't want anything hitting me in the face or anything like that, so I don't know if I want to do that.' But I didn't know it was going to be Sacha Baron Cohen hitting someone in the face. I'm glad I didn't do that."

She added, "I love him and think he's hilarious, but I don't know what my parents would think with that in my face in the middle of an awards show."

Hilton used to hit Hollywood clubs with pop princess Britney Spears, and denies rumors that there is bad blood between the famous blondes. "I was at her show in Las Vegas and she looked amazing. I love her. I think she's beautiful. Doing so well and I loved her show and the tour is awesome."