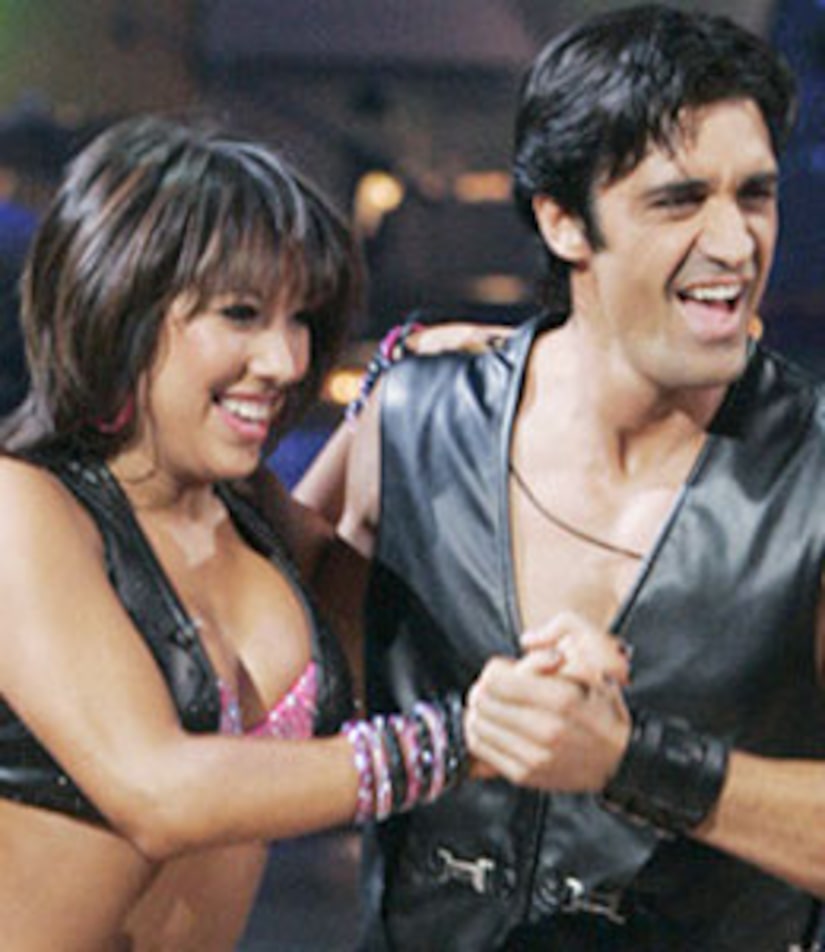 Monday night's "Dancing with the Stars" not only saw fierce competition among the remaining seven, the go-go 1960s were the source of a bubbly group dance -- which included wild wigs that made some of the dancers nearly unrecognizable!

"The Bachelor" castoff Melissa Rycroft and Tony Dovolani opened the show with a stunning tango, in which Melissa had been encouraged to find "her inner maneater." In a filmed bit, Tony introduced Melissa to "Desperate Housewives" star Teri Hatcher who taught her a thing or two about being a maneater. Judge Len Goodman said he thought it was fantastic and beautifully executed. Bruno said that the dance was the revenge of the Lolita. The couple came close to perfect with a 29 out of 30.

Rapper Lil' Kim and Derek Hough stole the top spot last week and last night they showed off their rumba. The partners tried to tone down Kim's sexiness, at the request of Len Goodman, who said parts of the dance were on par but not to try and please one person. Bruno said it was a good rumba and that she should bring back the raunch. The dancers received a total of 26 points.

Real-life couple Chuck Wicks and Julianne Hough wanted to focus on technique this week with their samba. Len said it was Chuck's best dance to date. Judge Carrie Ann Inaba stood up and danced! Wicks and Hough earned triple 9s for a total of 27 points.

Gymnast Shawn Johnson and Mark Ballas danced the cha cha. The 17-year-old was exhausted from travel and only had a few days to practice, but she was able to pull it off. Carrie Ann said that the dance came to life for her tonight and Bruno said it was like watching a young Debbie Reynolds or Mitzi Gaynor, "young and flamboyant." The judges gave the couple a 28 out of 30.

Sexy actor Gilles Marini and Cheryl Burke were the final couple to grace the dance floor with the Viennese waltz. Len thought the routine was romantic and superb. Carrie Ann said she thinks Gilles is the most graceful male dancer she has ever seen. The couple also received triple 9's, for a total of 27 points.

Lawrence Taylor and Ty Murray both delivered mediocre waltzes and are expected to land in the bottom two.

The 1960s group dance was choreographed by former ballroom dancer Christian Perry. Carrie Ann thought the girls were on point and Len said it took him back to his days of clubbing in England.

Find out who will be eliminated tonight on "Dancing with the Stars"!