"Extra" was in Scotland to visit overwhelmed overnight sensation Susan Boyle as she greeted photogs for the first time! The 48-year-old told the press, "I'm enjoying it immensely. I am!" She even sang an encore of "I Dreamed a Dream" for cameras! 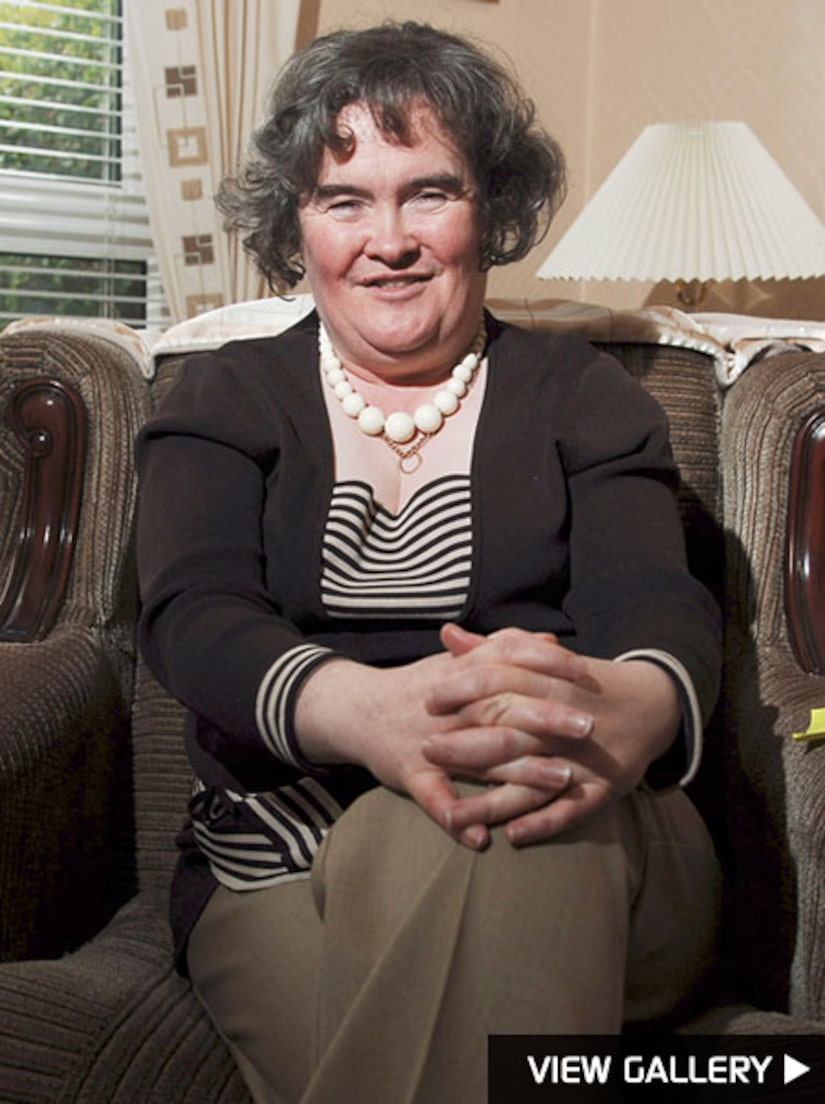 On Friday in London, "Britain's Got Talent" judges Piers Morgan and Amanda Holden sent a message to Boyle via "Extra." Morgan says he would like to apologize. The author and TV personality admits, "Simon Cowell and I in particular were fairly mocking her... When she began to sing, it was jaw-dropping. Amazing." Morgan was obviously blown away by Boyle's talent and he "felt a little bit guilty" and "a little uncomfortable" but was moved by her performance. Holden added, "I think it was a very shallow thing to say, but we completely judged her by her appearance... We utterly judged a book by a cover. But I was absolutely thrilled for her that she proved us all wrong."

A new song was released on Scotland's Daily Record of Boyle back in 1999. Boyle belted a bluesy ballad version of "Cry Me a River" for a charity. Only 1,000 copies of the disc were ever produced.

There's no question Susan Boyle has talent, but how about fortune? Paul Potts won "Britain's Got Talent" in 2007 and judge Simon Cowell signed him to a $1.4-million contract. Some estimate Boyle could make $7 million -- even if she doesn't win!

Fortune is on its way, but a makeover isn't going to happen anytime soon. Amanda Holden tells the U.K.'s Daily Mirror, "I won't let Simon Cowell take her to his dentist and I certainly won't let her near his hairdresser. The minute we turn her into a glamour-puss is when it's spoiled," she says.

Holden would also like Boyle to remain au naturel. He tells "Extra," "I think the reason we've all fallen in love with her is because she's genuine. She looks like someone that can live on your street. Your next door neighbor or anybody you've seen in your local village." Simon Cowell agrees and likes Boyle the way she is, telling "Extra," "Part of her charm is the fact that she is what she is."

Susan has admitted she's never been kissed, Simon tells "Extra", "No, I will not be the first person to kiss her." Simon's fellow judge Piers jokes, "I'm going to take her on a romantic date to a London restaurant with some flowers and chocolates. My girlfriend is history. Susan Boyle has taken over!"

The judges and the world will hear Susan sing again when she returns to compete on "Britain's Got Talent" in May.