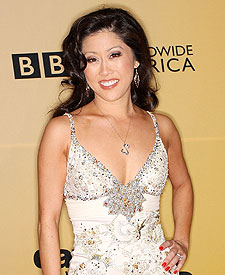 Kristi Yamaguchi pulled out all stops on the dance floor last night -- and nailed a perfect score of 60 in the first night of the finals! Now, the question looms -- will the Olympic skater be the second woman ever to be named the winner of "Dancing with the Stars" and score the coveted mirrored ball trophy?

"You obviously have to get the technique, but also complete with the personalities that all the boys have," Yamaguchi told AP after the Monday's show, "I think their smiles and personalities melt hearts across the country." Perhaps they'll also melt the thin ice she's left them on.

Although Kristi has been a consistent winner with the judges, a large part of what determines the outcome is how well the dancers woo the viewers -- and men typically fare better than the female dancers.

"The men are more easy," said judge Carrie Ann Inaba after one of Yamaguchi's dances, "they have a natural tendency to be crowd pleasers, and it's very difficult to keep up with that -- but not tonight, girl!"

Cristian de la Fuente trailed Yamaguchi by eight points, ending last night with a score of 52 after a sexy free dance. NFL star Jason Taylor finished last, despite a super sexy shirt-busting dance -- with 51 points. Find out who grabs the championship of "Dancing with the Stars" -- tonight on ABC!