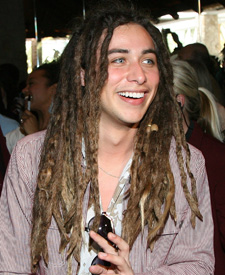 The dreadlocked hopeful blew it bigtime on the no-no of the Idol stage -- forgetting the lyrics during a dreadful rendition of Bob Dylan's "Mr. Tambourine Man," after a less than stellar go at "I Shot the Sheriff," which Simon called "utterly atrocious."

The 20-year-old guitarist became the third "Idol" wannabe to forget lyrics this season, saying, "I lost some lines there; that's kinda bad." Randy Jackson said that he was not "in the zone," but Cowell took a more blunt approach: "Jason, I'd pack your suitcase."

David Archuleta aced both performances with nearly perfect renditions of Ben E. King's "Stand by Me" and an original take on Elvis' "Love Me Tender." David Cook mistakenly took on The Who's "Baba O'Riley," -- not a good choice, but the judges did like his first choice of "Hungry Like a Wolf." Syesha did a Tina Turner version of "Proud Mary," which paled in comparison to the original, and then she turned on the waterworks after Randy critiqued her offering of "A Change is Gonna Come," by Sam Cooke.

Tune in to FOX tonight to see if viewers agree with the judges.