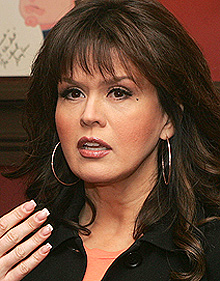 Marie Osmond was back on her feet last night for “Dancing with the Stars” just one week after her terrifying, caught-on-tape fall.

“You just have to pull up the boot straps and go for it again. Thankfully, not too many people saw it happen!” Marie joked to “Extra” backstage as she rolled her eyes.

Though Marie grabbed headlines with her return, it was Melanie Brown who nearly stole the show. The Spice Girl grabbed a perfect ten from all three judges!

“I can’t believe that!” Mel B. told “Extra.” Turning to sexy partner Maksim Chmerkovskiy, Mel quipped, “I think I made a lot of ladies jealous. They'd love to be in this situation!”

Jane Seymour’s husband James Keach was also back in the audience after missing last week because of the California wildfires. Keach stayed behind to fight the flames near the couple’s Malibu home.

While Jane was red-hot last night, her partner Tony Dovolani was on the defense. Tony opened up to “Extra” about reports he’s fed up with Carrie Ann Inaba’s constant criticism, a brewing feud that apparently took a nasty turn with the pro dancer giving Carrie Ann a ballroom rule book to study!

“It’s true,” Tony told “Extra.” “But us not getting along? That’s false, because we really do get along. We always nudge each other all the time. It's always in good fun.”

Added Jane, “I was there when it happened. Carrie Ann thought it was hysterical.”