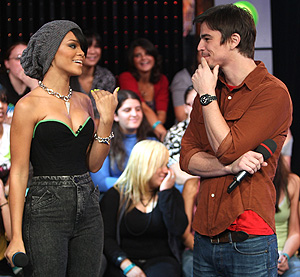 So are the two dating?

According to Rihanna’s rep, the two are just friends. They met during an episode of MTV’s “TRL” last week and went out afterward with a group of friends.

Josh, 29, has told “Extra” in the past that he prefers to keep his private life private.
“I don’t like to talk about it,” he insisted. “I try to avoid the press as much as possible.”

Josh has previously been linked to Scarlett Johansson and model Helena Christensen.