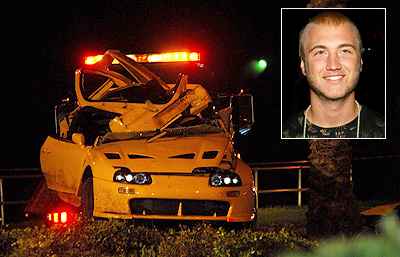 John Graziano is comatose and will likely require care for the rest of his life, according to court documents.

The young Marine was just back from Iraq when he and Nick, son of wrestling star Hulk Hogan, climbed into Nick’s Toyota Supra on Aug. 26 and wrapped the vehicle around a tree.

Police said speed was a factor in the Florida crash. John was not wearing a seatbelt. Nick, 17, was wearing his and escaped with minor injuries.

Now, John’s mother, Debra Graziano, is legally petitioning a Florida court to permit her to assume guardianship of her 22-year-old son. She is separated from John’s father, Edward.

Those court papers include the heartbreaking diagnosis that John can only open and shut his eyes and that he is on life support.

Police are continuing to investigate the accident. No charges have been filed.