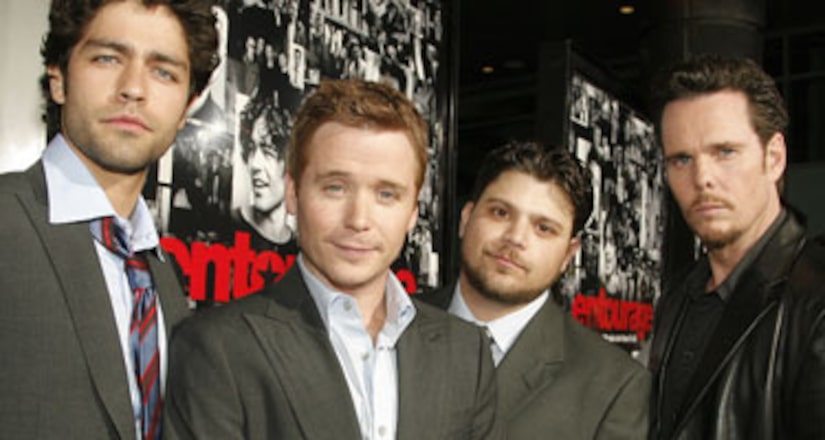 After a long hiatus, the new season of “Entourage” is bigger and better than ever.

“I remember the first premiere we had, we had two people with disposable cameras next to the dumpsters, literally,” joked Jeremy Piven.

Now, Piven and his band of HBO brothers, including Kevin Dillon and Adrian Grenier, return in full swing this Sunday.

“'Entourage' is like a paid vacation,” Grenier said of his job.

But before an all-night celebration for his TV baby, Wahlberg told “Extra's” Jon Kelley the most fulfilling thing for him is “just to see all these guys that I believe in doing their thing.”

While he may be the boss on set, Wahlberg admitted, “They'll give me a little bit of love. The only time they need me is if I have to talk someone off the ledge or diffuse a fire.”

The show, a comic soap about Hollywood's rich and famous, has its own Hollywood fans, including Mary J. Blige, who knows all about real-life entourages.

“I used to have 20 people rolling with me. You want to keep all your family members in,” Mary J. dished. “You got to keep that promise until they mess it up enough; then you're like -- everybody out!”

As for the guys, they are playing down their sex symbol status and weren't about to give Kevin Connolly the right to deem himself sexy.

“I was taking a little abuse because they said my chest hair is sticking out,” Kevin said. “I told them that's because I'm such a man. You should learn about it, sometime!”