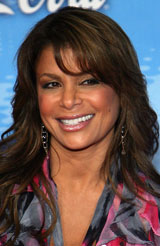 But Chris’ crushing news came as no surprise to Sir Simon, who predicted it was “bye-bye curly” before the results were even revealed.

The real “Idol” shocker of the night was instead the survival of Sanjaya, a guy known more for his changing hairstyles than his singing.

But the whole country seems to be falling for Sanjaya, including shock jock Howard Stern; Stern is now mounting a campaign through his Sirius satellite radio station to drive millions of listeners to vote for the “San-Man.”

The Sanjaya craze is also burning up the web on sites like Vote for the Worst and YouTube.

Even Wednesday night’s musical guest Gwen Stefani, who coached the contestants and rocked the “Idol” house, told our Terri Seymour she was blown away by Sanjaya.

“I love him, and I think he’s so cute," Gwen confessed.

In less than two weeks, J Lo mania will strike “Idol,” as she’ll hit the stage with a live performance.

In the meantime, after Wednesday night’s show, “Extra” had the exclusive limo ride home with Judge Paula Abdul.

“The two most vulnerable places to be are in front of a mirror or behind a mic,” Paula admitted. “It's very, very scary and what lies in that fear either is mediocrity or greatness.”

But is Paula finding success with romance?

“Honestly, I don’t think men should be afraid of me,” she said. “I think I’m nervous and shy. Maybe if I learned to flirt more. Maybe you can help me enroll in how to flirt.”

Paula also schooled us on the secrets behind her amazing body, revealing she’ll skip the gym if she’s too tired.

See which “Idol” America is tired of next week, as “American Idol” returns and another wannabe gets the boot on FOX!