Days ago, Robertson’s boyfriend Paul Floyd got down on one knee on a London rooftop.

Along with posting a video of his proposal, Floyd wrote on Instagram, “Introducing Brittany Leanna Robertson-Floyd. My wife to be x.”

When Paul asked Britt to marry him, she responded, “So much so!”

She then kissed him, saying, “I love you so much.”

Britt also thanked their friend for capturing the special moment.

In Floyd’s post, he also shared close-up photos of the unique engagement ring.

In her own Instagram Story, Robertson shared a selfie with her engagement ring, writing, “Did I Mention that Im fun? And engaged.”

The news comes only a few months after Robertson went public with their romance. In March, she posted a pic of herself hugging Paul, writing, “👑 of my ❤️.”

Britt has since shared more pics of their relationship.

Robertson was previously linked to her “A Dog’s Purpose” co-star KJ Apa.

In 2019, they were reportedly spotted packing on the PDA at the Entertainment Weekly Comic-Con party. 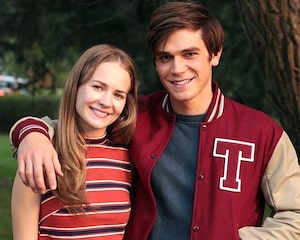 Apa and Robertson were seen holding hands and hugging, and — according to a source — "leaning in and kissing each other" at the bash. They were in a group that included Lili Reinhart, Camila Mendes, Cole Sprouse and Madelaine Petsch.