“The Real Housewives of Atlanta” star Falynn Guobadia has a baby on the way!

On Tuesday, Falynn announced that she is expecting her first child with boyfriend Jaylan Banks.

In a YouTube video, Falynn shared, with Jaylan sitting next to her, “Jaylan and I are expecting. We're adding another little one to the crazy bunch. It is Jaylan's first baby, so welcome aboard."

“I do realize that a lot of you and a lot of the blogs have somewhat caught wind of our little news and we just wanted to make sure that we made it past the two-month mark,” Guobadia noted.

Falynn also praised Jaylan for being “an amazing father figure” to her three boys.

Jaylan gushed about becoming a father for the first time, saying, “I'm as ready as I can ever be. I've always wanted to have some type of father figure in my life, so I'm giving back to the boys what I've never received... I'm ready to start the new adventure with you."

While they didn’t reveal the gender of the baby, Falynn expressed her desire for a girl. She explained, “I love being a boy mom... wouldn't take it back for the world... but it is time for the good Lord to bless me [with a girl]."

The news comes a few months after Falynn’s ex, Simon Guobadia, got engaged to her castmate Porsha Williams.

In May, Simon wrote on Instagram, “I asked her to marry me because we checked ALL of each other's boxes, and then some.” 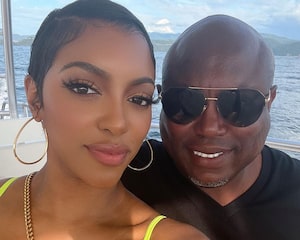 He went on, “We have done the individual work to sustain a healthy relationship, and I stand next to her, proud that we found each other. What we have is what we wish every single one of you out there - happiness. So when I asked...she said yes. That is ALL that mattered. Thank you again for your love and support. Truly appreciated 🙏🏾 #lovewins.”

Earlier this year, Falynn and Simon called it quits after two years of marriage.

According to Falynn, they have finalized their divorce.