Death rumors have been swirling since his hospitalization.

On Thursday, DMX’s manager Steve Rifkind took to Instagram to address the rumors, urging, “Stop with the rumors. He is still alive — and he is still on life support.”

Along with noting that “it’s not helping anybody,” Rifkind revealed that DMX’s family will release a statement on Friday.

He emphasized, “Let the family relax for a night.”

A day later, a source told TMZ that DMX's "organs are failing by the minute." His loved ones have been told to fly in immediately.

Earlier this week, brain function tests performed on DMX showed no improvement in brain activity. TMZ had reported the results were “not good.”

According to the site, DMX, 50, overdosed around 11 p.m. on Friday, then suffered a heart attack. His condition has been described as “vegetative” by some sources. TMZ says his brain was deprived of oxygen for nearly 30 minutes. 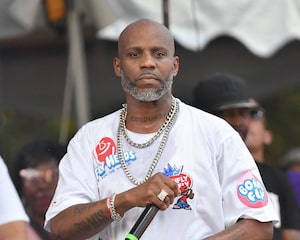 On Monday, hundreds showed up for a prayer vigil outside White Plains Hospital in New York, where he is being treated.