Earlier this week, Michael Straham showed off his gap-less smile, but it was all a big prank!

On Thursday, Strahan posted a video of himself wearing a mask, which he eventually took off to reveal his signature gap.

He told his Instagram followers, “I know a lot of you are wondering, 'oh, it's gotta be April Fool's joke, he's gotta be joking with the teeth ... he must not've fixed that gap, it's his signature. I was surprised, to be honest with you, at how many people were like, 'No! Don't get rid of the gap, it's your signature!' And I've always kind of looked at it that way, but I didn't know so many people cared.”

“I appreciate all the love for the gap, and I've had it for you know, almost 50 years,” Strahan said before pulling off his mask. “I just wanted to say, April Fool's!"

Michael quipped, “Come on, man! The gap is here to stay for a little while. Not going anywhere anytime soon… My mama likes it, so, for you, Mama."

A few days ago, Strahan’s dentist Dr. Lee Gause didn't confirm if the procedure was temporary or permanent. He told E! News, "There are lots of miraculous things that can be done with cosmetic dentistry and Michael Strahan has probably the most signature gap on television. It just shows the miracles that are possible with cosmetic dentistry to be able to close a gap that is the size of Michael Strahan's. I think he looks great. I think he was pretty excited about it." 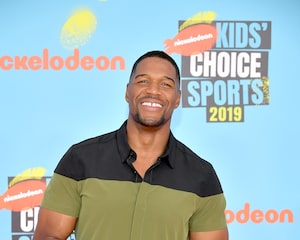 Another big name to fool everyone on April Fools’ Day was Heidi Klum, who announced that she was replacing Kim Cattrall in the new “Sex and the City” reboot. Along with posting a pic of herself with Sarah Jessica Parker, Cynthia Nixon and Kristin Davis, she wrote, “How do you say Samantha in German? It has been SO hard to keep this a surprise but I can finally share that I am joining the new season of Sex and the City! I can’t wait to toss back some Cosmos and kick up my Manolos with these amazing ladies @sarahjessicaparker @iamkristindavis @cynthiaenixon 💃👠🍸🗽🏙.”

Hours later, Klum posted a sexy video of herself with “April Fools” written on her forehead.

"Extra" pulled a prank on our own Rachel Lindsay. Watch!