On Tuesday, Tiffany announced the big news on Instagram, writing, “It has been an honor to celebrate many milestones, historic occasions and create memories with my family here at the White House, none more special than my engagement to my amazing fiancé Michael! Feeling blessed and excited for the next chapter! ❤️.”

Along with the announcement, Tiffany included a photo of herself standing next to Michael, whose family owns a the multibillion-dollar Boulos Enterprises and SCOA Nigeria. She is flashing a huge engagement ring in the photo.

Michael shared the same photo, adding, “Got engaged to the love of my life! Looking forward to our next chapter together.”

The news came a day before the presidential inauguration, which will signify the official end of her dad’s term.

Just last week, Tiffany and Michael were seen spending time together in Miami, where they dined at SAAM Lounge at SLS Brickell. Tiffany was also spotted at Joia Beach. An eyewitness shared, “Tiffany was seen sitting at a more-so isolated table tucked in a corner of the restaurant, wearing an oversized, low-brim sun hat. Tiffany was accompanied by a big group of friends and Secret Service security, which occupied several tables around Tiffany’s group, but remained inconspicuous the entire time.” 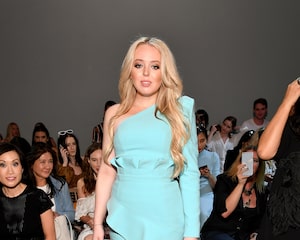 Is Tiffany Trump Dating a Billion-Heir?

A source told Us Weekly in 2018, “Tiffany is happy she has so far been able to keep things with Michael under the radar. But she introduced him to her family at Thanksgiving, and he comes across as a very intelligent young man from a great family.”