Kaley Cuoco and Lake Bell are getting animated in the DC Universe series “Harley Quinn,” with Kaley voicing Quinn while Lake takes on Poison Ivy. The duo was with “Extra's” Renee Bargh Tuesday to give us all the scoop!

Kaley talked about her one-year wedding anniversary with husband Karl Cook, saying, “He bought me a beautiful ring and we ate Taco Bell… We had Taco Bell for dinner and the most amazing bottle of red wine.” She clarified, “Meatless Taco Bell — all beans.”

As for life after “The Big Bang Theory,” the star is keeping busy with projects like “Harley.” She said it hasn't really hit the wall yet. "This would be our summer hiatus anyway, so it feels kind of normal that we wouldn't talk. Usually, we go our different directions and, 'I will see you in August,' so I think when that starts to come around, I will be like, 'OMG, I'm not seeing them again.' It will hit me a little more.”

She hasn't kept in touch with her castmates, but shared, “The next month or so, the texts will come in: 'Awww, we're supposed to be at our table read today.'" After 12 years together, she explained, “It's like family.”

Updating Renee on her latest animal adventures, Kaley said, “We rescued a mini dwarf goat. We adopted him, and he is the most delicious thing in the world.”

Lake is an animal lover as well, saying, “I rescued a puppy… a pit dachshund.”

The two said they loved working on “Harley Quinn.” Kaley said, “It's been a f--king blast.” Lake added, “You show up in sweatpants, you curse all day long.” Kaley interjected, “Fight, kick ass.” She went on, “This show has been so psychotically awesome, I don't know how else to describe it.”

The women don't exactly work together. Lake said, “We have to act with each other and improvise with each other, but we're never in the same room.” Kaley explained, “We're all alone in the booths.” Kaley takes on her ex, the Joker, in the series, saying, “It starts out with this relationship of her trying to get out… Then, you know, a few episodes later, she falls back in.” She said with a smile, “It's weirdly realistic.” 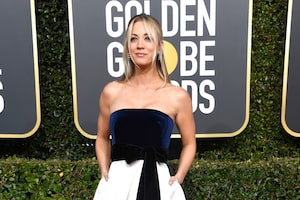 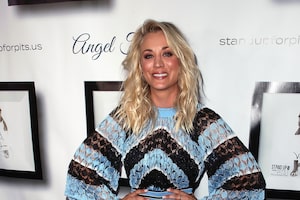 Kaley Cuoco’s Favorite Moment from Her Wedding, Plus: Her Plans After ‘Big Bang Theory’ 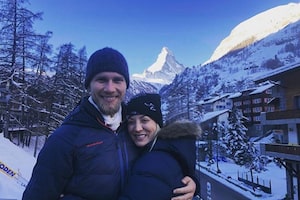