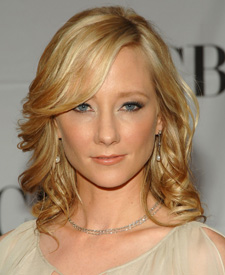 Is "Men in Trees" star Anne Heche having trouble making ends meet? Rumor is that the blonde actress is feeling the pull on her purse strings since "Trees" was axed -- and now, "Extra" is going on rumor control!

"I am continuing to look for work, but I have no offers pending, and the impending strike by the Screen Actors Guild reduces my prospects for work even further," Heche writes in court papers, as reported by People magazine.

Anne is reportedly stating that she doesn't have the money to make spousal and child support payments to her ex Coley Laffoon -- and on Wednesday, a judge cut her some slack, stating that Heche could forgo the nearly $15K she's set to pay in July.