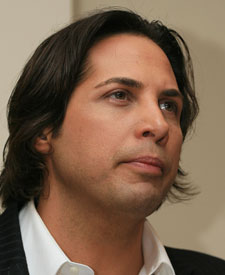 Ashley Dupre may be out of Eliot Spitzer's life, but "Girls Gone Wild" founder Joe Francis thinks she's still being paid -- to disappear!

"There are people working beyond the rest of us who are making sure this thing goes away," Francis told "Extra" in an exclusive interview. "She really has kind of vanished, and it just makes me wonder if she's getting paid off or taken care of by Spitzer's friends, which is really what I'm inclined to think after getting certain emails and correspondence."

Francis almost paid Ashley a million bucks to appear in "GGW." "We made a million-dollar offer," Francis explained. "We went down a negotiation, and those negotiations went south with her attorneys and they were demanding more money." Ashley's hesitation was Joe's luck. "I basically said, 'Has anybody checked to see if we shot her?' As a joke - as a total joke - we did. We typed her name in the database - and there she was."

There she was, indeed -- and not just a fleeting glimpse, either! Joe's got seven hours of video of the celebrated Miss Dupre. Francis told "Extra" Ashley left an impression, explaining, "She told me 'Girls Gone Wild' was her dream to do, and I said, 'Well, you're in the right place.'" When asked if his relationship went beyond professional toward the intimate, Francis insisted, "Not at all. Not one bit, no. Thank God!" Ashley was wild on camera, but also gave them a phony story about who -- and how old -- she really was. "She gave a fake name and a fake ID," Francis explained.

Joe's releasing footage of Ashley's adventures on a DVD called "Hookers Gone Wild." "It's really good stuff, and I think she looked her best back then," he said. The footage will be included in the premiere issue of his "Girls Gone Wild" magazine, which goes on sale April 22.