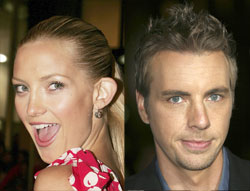 Kate Hudson and Dax Shepard may have called it quits.

A new report says the couple broke it off last week after Kate got "bored" with the relationship. Kate's reportedly telling people the break was "clean."

Kate and the "Punk'd" comedian first hooked up after she split from Owen Wilson earlier this summer. Though the two denied they were an item, they were widely photographed cozying up around Malibu together. In August, "Extra" reported that Dax, 32, had met Kate's famous mom Goldie and that their relationship was getting serious.