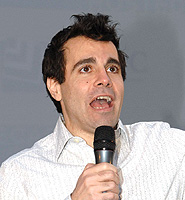 Comedian Mario Cantone – long thought to be in the running to replace Rosie O’Donnell on “The View” – is telling “Extra” exclusively that he will most likely not be taking the coveted spot on the show.

“I think I could, but I think it should be a woman,” Mario revealed.

Mario, best known for playing a flamboyant wedding planner on “Sex and the City,” has frequently guest hosted since Rosie left.

Since Barbara Walters announced she’s looking for not one, but two new hosts, word has quickly spread that producers were looking for at least one male.

But Mario today told “Extra” he doesn’t think it will happen.

“It’s a woman’s show,” Mario explained. “And I think a gay man is still a man, and the viewpoints could be very different.”

Who do you think should host “The View?” Leave your comments here.