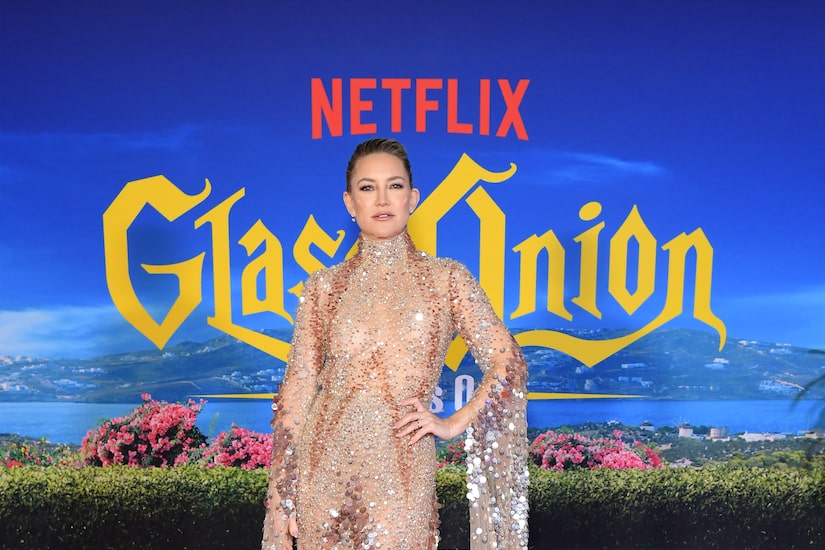 On Monday night, Kate Hudson was glamorous in sparkling Elie Saab as she hit the red carpet at the L.A. premiere of “Glass Onion: A Knives Out Mystery.”

Last week, Kate was spotted arriving at Leonardo’s star-studded party with Bradley Cooper. She dished, “It was so much fun… I’ve known Leo since I was 17… It was a blast. It was a needed bash.”

While Hudson doesn’t love watching herself on the big screen, she has watched “Glass Onion: A Knives Out Mystery” three times, something she’s never done before!

“Rian [Johnson]’s so awesome… Every time you see this movie, you see something different, so I’m excited,” Kate added. “The first time I’d seen it, Rian kind of didn’t let any of us see the film before the premiere, which was a first for me… I get the sweats, I get a bad, like, migraine… I have a lot of anxiety, but you know the audience goes with this in such a deep way, they’re so engaged. It was uproarious laughter. I had so much fun watching everybody’s work in this film.”

When asked to describe her character Birdie Jay, Kate used “loud,” “bold,” and “tone deaf,” adding, “She’s a total party girl. She’s just desperate to be loved and validated and she just fails at that miserably all the time.”

“Glass Onion” is in theaters November 23.