A case of the jitters! Country artist Dillon Carmichael, 27, popped the question to girlfriend Shayla Whitson, 24, but he was so nervous he “pretty much blacked out.”

In a new interview with People, Dillon reveals he proposed to Shayla during what she thought was a photo shoot to celebrate their two-year anniversary.

The couple was at a gorgeous property near Nashville, owned by Drake White and his wife Alex, when he tried to ask for her hand in marriage. He told the magazine, “As soon as I got down on one knee, she said yes.”

The singer went on, “I was so nervous that I pretty much blacked out! I don’t remember anything after that.”

The couple is planning a one- or two-year engagement. Carmichael said, “That will give us time to accomplish some of the goals we have before we get married. We’re not in a hurry. We have made a commitment to each other and now we can just take our time.”

The proposal was a long time coming. Carmichael confessed that he fell for her the first time he laid eyes on her in December 2017, at a show in Kentucky. “I thought there was an angel standing there.”

He added, “I had told my band I was going to marry her before we were even dating because I just knew it… I would even tell her, ‘I’m going to marry you one day,’ before we started dating, which is kind of an absurd thing to say. But now that it’s actually happening, I guess it’s not that absurd.” 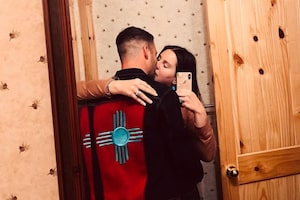