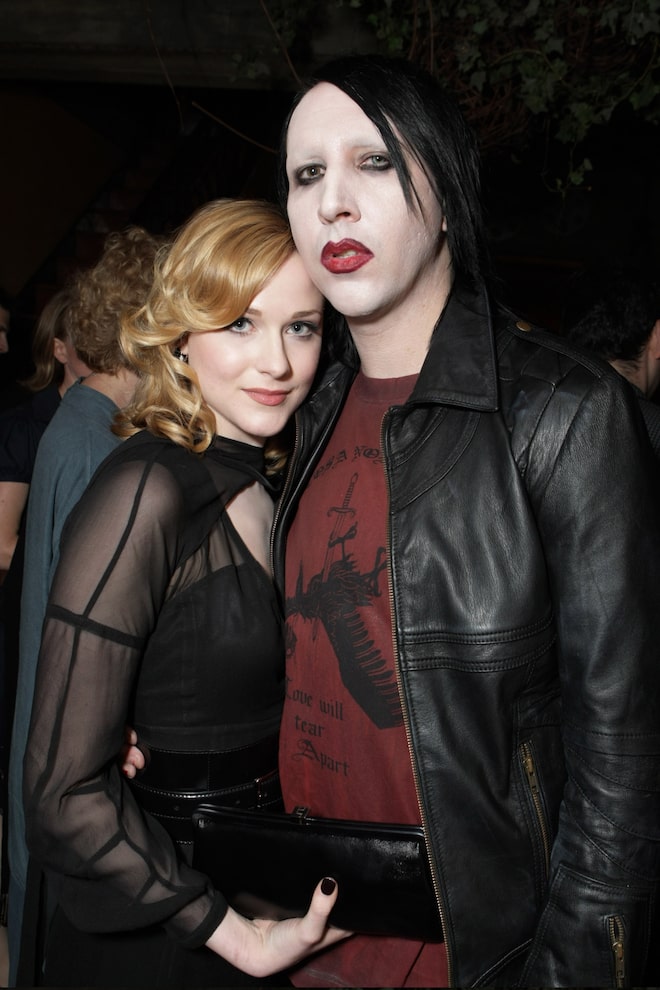 UPDATE: Late Monday, Marilyn Manson responded to the claims with a statement on Instagram that said, "Obviously, my art and my life have long been magnets for controversy, but these recent claims about me are horrible distortions of reality. My intimate relationships have always been entirely consensual with like-minded partners. Regardless of how - and why - others are now choosing to misrepresent the past, that is the truth."

Evan Rachel Wood has spoken out about domestic violence in the past, and now she is naming her alleged abuser as Marilyn Manson.

Wood and other women are speaking out about the abuse they claim to have endured at the hands of the singer. Manson has denied similar accusations in the past.

Evan and Manson went public with their relationship in 2007, and got engaged in 2010 before calling it quits later that year.

In her Instagram post, Evan states, "The name of my abuser is Brian Warner, also known to the world as Marilyn Manson. He started grooming me when I was a teenager and horrifically abused me for years. I was brainwashed and manipulated into submission. I am done living in fear of retaliation, slander, or blackmail. I am here to expose this dangerous man and call out the many industries that have enabled him, before he ruins any more lives. I stand with the many victims who will no longer be silent."

Wood has spoken out about abuse in the past while working in support of the Sexual Assault Survivor’s Bill of Rights. In 2018, she testified in front of the House Judiciary Subcommittee. Without naming her abuser, she said, “My experience with domestic violence was this: Toxic mental, physical and sexual abuse which started slow but escalated over time, including threats against my life, severe gaslighting and brainwashing, waking up to the man that claimed to love me raping what he believed to be my unconscious body.”

She shared her story again in front of the California legislator while working on the Phoenix Act in 2019. She told a horrific story of abuse involving isolation from loved ones, sleep deprivation, threats, restraint, physical abuse and rape. “By the time I realized I was in a bad situation I felt completely trapped and terrified for my life,” she said.

The other women standing up alongside Evan are sharing similar stories of alleged mistreatment and long-term suffering.

Ashley Walters, who worked for Manson around 2010, wrote, "Horrifying, deranged behavior and insane scenarios became normalized… I continue to suffer from PTSD, and struggle with depression. I stayed in touch with quite a few people who went through their own traumas, under his control. As we all struggled, as survivors do, to get on with our lives, I’d keep hearing stories disturbingly similar to our own experiences. It became clear the abuse he’s caused; he continues to inflict on so many and I cannot stand by and let this happen to others. Brian Warner needs to be held accountable."

Sarah McNeilly says she dated the singer, and detailed the emotional and physical abuse she endured. Sarah explained, “I was emotionally abused, terrorized and scarred… I was thrown up against a wall and he threatened to bash my face in with the baseball bat he was holding, for trying to get him to pick out a pair of pants prior to a music video… I have been afraid to bring any spotlight upon myself as to avoid winding up in his crosshairs again. As a result of the way he treated me, I suffer from mental health issues and PTSD that have affected my personal and professional relationships, self-worth and personal goals. I believe he gets off on ruining people’s lives. I stand in support of all that have and all will come forward. I want to see Brian held accountable for his evil.”

Ashley Lindsay Morgan said he contacted her about a film and photo series and it turned into a dark relationship. “There was abuse, sexual violence, physical violence and coercion. I still feel the effects every day. I have night terrors, PTSD, anxiety, and mostly crippling OCD. I try to wash constantly to get him out or off of me… I am coming forward so he will finally stop.”

A woman named Gabriella also shared her experience, saying she met Manson in 2015 and he “love bombed” her, before things took an allegedly violent turn. Now she says, “It has taken me five years to speak out and say that I was in an abusive relationship. I have been diagnosed with PTSD and still suffer from nightmares. I blocked out a lot of the memories, but the feelings remain and manifest in various ways. The reason I’m finally sharing this traumatic experience is for my healing and because I’m done being silent. I don’t believe it’s fair for someone to not be held accountable for their horrific actions. I’m not a victim. I’m a survivor.”

After news broke of the allegations, Manson was dropped from Loma Vista Recordings. The label told Variety in a statement, “In light of today’s disturbing allegations by Evan Rachel Wood and other women naming Marilyn Manson as their abuser, Loma Vista will cease to further promote his current album, effective immediately. Due to these concerning developments, we have also decided not to work with Marilyn Manson on any future projects.”

As noted before, Manson has denied such claims in the past. A police report was filed against him in 2018, alleging unspecified sex crimes taking place in 2011. At the time, his lawyer Howard E. King told The Hollywood Reporter that the "allegations made to the police were and are categorically denied by Mr. Warner and are either completely delusional or part of a calculated attempt to generate publicity... Any claim of sexual impropriety or imprisonment at that, or any other, time is false." Los Angeles District’s Attorney office dropped the case due to lack of corroborating evidence.

Manson and his team have not yet addressed the new allegations.