Tennis star Maria Sharapova, 33, and her art dealer boyfriend Alexander Gilkes, 41, are taking their relationship to the next level!

On Thursday, Sharapova announced their engagement on Instagram. Along with posting a series of pics and videos of herself with Alexander, she wrote, “I said yes from the first day we met❤️This was our little secret, wasn’t it 💍🥂@gilkesa.”

Alexander posed a pic of Maria kissing him on the forehead. He captioned the pic, “Thank you for making me a very very happy boy. I look forward to a lifetime of loving you, and learning from you @mariasharapova #💍.”

The pair have been dating for more than two years.

Later in the year, Sharapova eventually posted a pic of Alexander on her Instagram Story. 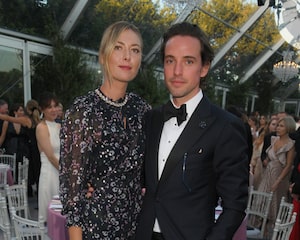 Gilkes is the co-founder of Squared Circles, which launched earlier this year. Alexander has remained good friends with Prince William since their days at Eton College.

He was previously married to fashion designer Misha Nonoo, who played matchmaker for Prince Harry and Meghan Markle.