The Wanted singer Tom Parker, 32, is a dad again.

Parker's wife Kelsey Hardwick has given birth to a baby boy, according to his bandmate Max George.

During an interview on “Lorraine,” George shared, “Kelsey gave birth to the second child last week.”

George also opened up on Parker's health after being diagnosed with stage four glioblastoma. He said, “I spoke to him yesterday and he's doing good; he's doing great… he's a fighter. So, Tom will be alright. If he's watching by the way… love you all."

Just weeks ago, Parker broke the news about his diagnosis, telling Instagram followers, “There's no easy way to say this but I've sadly been diagnosed with a Brain Tumour and I'm already undergoing treatment. We decided, after a lot of thought, that rather than hiding away and trying to keep it a secret, we would do one interview where we could lay out all the details and let everyone know the facts in our own way.”

“We are all absolutely devastated but we are gonna fight this all the way. We don't want your sadness, we just want love and positivity and together we will raise awareness of this terrible disease and look for all available treatment options. It's gonna be a tough battle but with everyone's love and support we are going to beat this,” Parker continued. 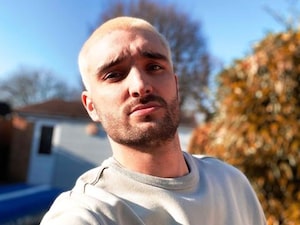 Kelsey also opened up about how the diagnosis had affected her pregnancy. She told OK! magazine, “If someone had told me my life was going to be taking Tom to radiotherapy in London every day and I'd be 36 weeks pregnant at the time, I wouldn't have believed them. To be honest, I think I've forgotten I'm pregnant. It's all about Tom at the moment."

Tom and Kelsey are also the parents of daughter Aurelia Rose, who was born last summer.

The couple announced that Aurelia was going to be a big sister in May.